2 1972 Ford Bronco “Yellowjacket” Is All Lifted and Stroked, Bows to the Mighty LED

3 Hennessey Pushed the Bronco Into the Sports Car Territory, Can Go Off-Road Too

Priced from $69,995 before options, the 2022 Ford Bronco Raptor is the hottest off-roader of the moment even though an F-150 Raptor is better value for the money. Prospective owners can begin placing orders in March, and until then, walkarounds of the newcomer will have to suffice.
58 photos

“Brash” would be the best way to describe the most badass off-road SUV produced by FoMoCo. But as it’s often the case with performance-oriented products, the Bronco Raptor presents a few questionable design cues.

The most obvious point of contention is the design, which is dominated by the larger-than-life flares. The rear flares are tacky at best, and the way the front units are integrated leave much to be desired. The body-color fender vents give off a toy-like aesthetic, and the power bulge on the hood is comical given that we’re dealing with the 3.0L EcoBoost twin-turbo V6.

Pictured with 37-inch steamrollers from BFGoodrich mounted on 17- by 8.5-inch beadlock wheels, the Bronco Raptor is gifted with taillights that wouldn’t look out of place in a Facebook ad from AliExpress. The design really feels poor compared to a Sasquatch’d model, but nevertheless, the most extreme Bronco is definitely going to fly off the proverbial shelves.

Deliveries will begin this coming summer, and customers with existing orders for the Bronco can upgrade to the Raptor if they so wish. That’s another way Ford attracts our attention from the plethora of customers who still haven’t received their Broncos despite having day one reservations.

Estimated to make 400-plus horsepower, the Raptor is nearly $20,000 more than a four-door Wildtrak. Only available with four doors although the two-door Bronco is better at off-roading shenanigans, the Raptor competes only with the four-door Jeep Wrangler Rubicon 392 that retails from $76,395.

9.8 inches (24.9 centimeters) wider than a base four-door Bronco, the Raptor will be produced exclusively at MAP alongside the Ranger pickup. 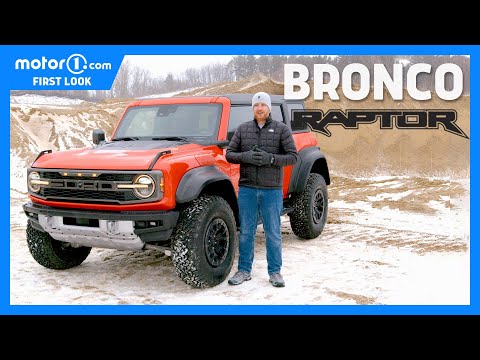