5 1966 Ford Mustang Convertible Oozes Classic Elegance, Yours for Less Than a New Mach 1
Car video reviews:
Up Next

Someone Paid Over $11M in Bitcoins for Benetti's Timeless Oryx, in First-of-Its-Kind Deal

Ford is encroaching on the Jeep Wrangler’s turf, slowly and steadily. In response to the V8-engined Rubicon 392, the Blue Oval is much obliged to sell you the Bronco Raptor that features a V6 with more than 400 hp.
58 photos

As we’re sitting here, waiting patiently for the output figures of the 3.0-liter EcoBoost lump to be published, the peeps at Bronco Nation decided to give us a thorough walkaround of the most badass utility vehicle that Ford currently offers. Jordan Parker starts by popping the hood, revealing two struts instead of a prop. Given that even Dacia equips the most basic trim level of the Duster with hood struts, this upgrade was very long overdue.

Amber-colored running lights instead of white LEDs also need to be mentioned, a styling decision that may have had something to do with the front grille-mounted marker lights and the F-150 Raptor’s amber DRLs.

Somewhat unexpected for the Bronco Nation’s host, Jordan Parker admits the larger-than-life flares aren’t much to his liking. “But it is what it is, and it does break up the color a little bit.” He also recommends Ford to offer body-color and carbon-fiber flares. The first option would be interesting, indeed, but the latter option seems to be pointless on this type of vehicle.

Even from the standpoint of design, it would look worse than the molded-in-color flares that cover 37-inch rubber boots that wrap 17-inch wheels. Various reinforcements increase the body-in-prime torsional rigidity by more than 50 percent over a lesser four-door model, and the trick suspension componentry increases maximum wheel travel by 60 and 40 percent. To the point, that’s 13 inches (33 cm) up front and 14 inches (35.5 cm) out back.

Carbon-fiber accents on the steering wheel and 10-speed transmission’s gear lever may polarize opinion, but hey, customers also get a fully digital instrument cluster that’s not available on lesser Broncos. Speaking of which, the Braptor sure looks huge parked next to a non-SAS Badlands. 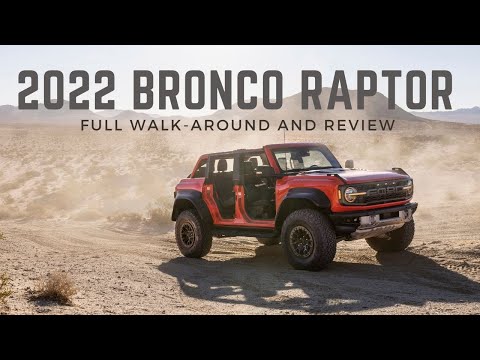