While some people are still waiting for their regular Ford Bronco to be produced, the marketing machine of the Blue Oval thunders on with the 2022 Bronco Raptor. Now it’s time for more camouflage to drop, and additional information to seep through.
6 photos

Already one of the most popular – for both the right and wrong reasons (such as delays, manufacturing quality issues, etc.) - Ford’s Bronco relentlessly continues to showcase its reinvented sixth-generation lineage. The regular 2022 Broncos have been unveiled, so now it’s almost time for the curtain to fall behind the high-performance Bronco Raptor derivative.

Naturally, Ford has its very own “independent” (but we all know better) “The Bronco Nation” community to grow closer to the fans. With perks, of course, such as getting an early look ahead of everyone else at the Bronco Raptor goodies. And we’re all invited to tag along, of course, and try to figure out everything that’s still covered in (considerably less thick) camouflage.

Well, as the Bronco Raptor is almost ready to fully break cover, the SUV already looks huge. This is cause for initial negative reactions, as aficionados don’t look impressed by even wider fender flares that might also be MIC (molded-in-color), just like the door handles and exterior mirror housings. Lots of plastic on something that’s going to storm deserts, dunes and bash them at high speed isn’t bad... but then people also commented on the upcoming dealer markups!

Not everyone is disappointed, of course, even as the company hasn’t confirmed exactly what powers the monster. Naturally, it should be something feisty, as the confirmed goodies already include 37-inch tires, a high-travel suspension, and “much more.” As such, the rumor mill is already going crazy with ideas ranging from the Coyote V8 (probably not) to F-150 Raptor’s 3.5-liter twin-turbo EcoBoost (more likely).

Now, all we have to do is wait for the official release and the teased first deliveries coming sometime in the middle of 2022 (summer – so June or July) to find out if the engine keeps it in the 300+ horsepower range or does some magic and crosses the 400+ hp threshold. 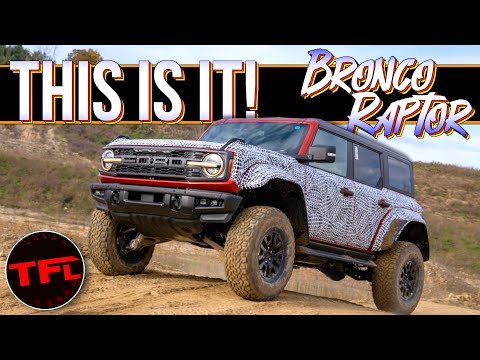