2 2022 Ford Bronco Constraints Are Getting Worse

4 “The Quality Is Below Any Other Vehicle I Have Ever Owned,” Says Ford Bronco Owner

5 Ford Recalls About 63,000 Broncos and Rangers Over Windshield That May Detach
Car video reviews:
Up Next

Tommy Mica recently checked out Ford’s all-new Bronco Raptor, which has already sold out for the 2022 model year. Tested in Palm Springs, the manufacturer-plated SUV in this video is adequately quick to 60 mph.
58 photos

Using the AiM Solo DL, which is a very respected tool for acceleration tests, he squeezed out 6.84 seconds on a public road where the speed limit is 65 mph. It may not be all that impressive at first glance, but rather than a quarter-mile monster, the Bronco Raptor was designed specifically for dune bashing at sustained high speeds. The all-terrain rubber boots, which measure 37 by 12.5 inches, are not made for blistering acceleration either.

Fill ‘er up with premium fuel, and you’ll get 418 horsepower at 5,750 rpm. Gifted with tragically over-the-top styling, especially those outrageous flares, the Bronco Raptor isn’t as eco as the powerplant’s moniker suggests. 15 miles per gallon (nearly 15.7 liters per 100 kilometers) in the city and 16 mpg (14.7 l/100 km) on the highway should be achievable as per the EPA. 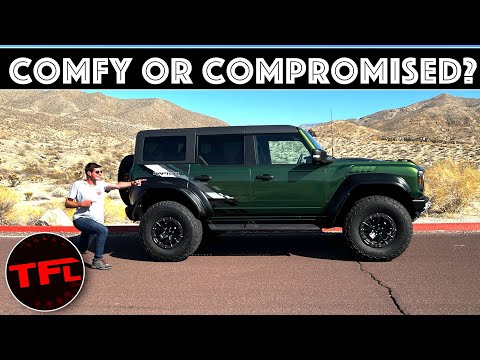