2 Doug DeMuro Samples 2022 Cadillac CT4-V Blackwing, Wouldn’t Have it Over a BMW M3

4 2021 Cadillac CT4: Forget Showing Off, Greatness Is Something of Substance

Have you ever wondered where the CT4-V Blackwing should sit in the pantheon of fast Cadillacs? Is it Top 3? Probably not. But you can make a case for it being worthy of Top 5 consideration. It’s certainly quick enough off the line, and that’s worth something to individuals who appreciate a good drag race.
6 photos

For the record, I have the CT5-V Blackwing, CTS-V and the ATS-V in my top 3 all-time fast Caddys, with the CT4-V Blackwing hot on the heels of its predecessor, the ATS-V. Yes, you could probably switch them around, but the newer CT4-V Blackwing, on paper, doesn’t really sound like that big of an improvement over the ATS-V.

That doesn’t mean it’s not a great sports sedan, because it is. It’s hard to leave anybody wanting more when you already pack a 3.6-liter twin-turbocharged V6 unit, sending 472 hp and 445 lb-ft (603 Nm) of torque to the rear wheels.

Cadillac insisted that its Blackwing models came with RWD, but judging by where this segment is right now, I’m not so sure that was the right call.

Anyway, once you put the power down in your CT4-V Blackwing, you’ll be hitting 60 mph (97 kph) in 3.9 seconds if you go for the optional 10-speed automatic, or 4.2 seconds if you’d rather have the six-speed Tremec manual gearbox.

Now, the one you’re about to watch here is a gorgeous Electric Blue example, which is definitely modified (to an unknown extent). We can confidently say that, because on its best run, it managed to cover the quarter mile in just 11.25 seconds. That’s more than a second quicker than what Cadillac would tell you the CT4-V Blackwing can do – it was even quicker than a stock CT5-V Blackwing.

Unfortunately for its driver, the baby Blackwing lined up against a couple of tuned CTS-V and ATS-V models that were genuine 10-second cars. In the end, it only won a single race at the Orlando Speed World Dragway in Florida. 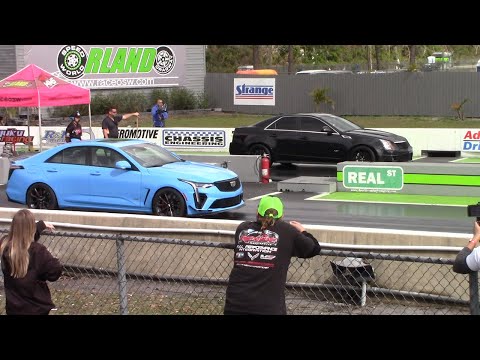