2 Bentley Will Drop Its First NFT This September, Here's What We Know About It

It should come as no surprise to anyone that Bentley's Continental GT Speed is quick. The figures are compelling, but most people have not had the opportunity to ride in a vehicle with that kind of power. While some of us were fortunate enough to drive a Bentley with plenty of power on tap, we did not get to do it on the famous German autobahn, where it could stretch its "legs."
7 photos

Well, that part has been taken care of by someone else, and now there is a video of just how quickly a 2022 Bentley Continental GT Speed can accelerate on the open road, as well as what happens when someone guns for its top speed. Mind you, this version of the Continental GT can reach 335 kph (208 mph), while the 0 to 100 kph (62 mph) sprint is done in just 3.6 seconds.

This version of the Bentley Continental GT is no slouch, and you would expect that from a vehicle that has Speed in its name, right? Now, while there are many other reviews online of the 2022 Bentley Continental GT Speed, neither is on the German autobahn, so let us take a minute to be thankful to the folks at Auto Top NL, who create this kind of content legally on an unrestricted part of the German autobahn.

We hope that this does not need to be mentioned here, but we will do it anyway. For the sake of whatever you treasure the most in this world, do not try to replicate this on the highway in your country.

Driving at this kind of speed has its risks in Germany, where there are sections of highway that allow drivers to go all-out on the speedo, but doing anything close to this while everyone else is driving at normal highway speeds and not expecting someone to shoot past them at over 186 mph is just a lack of regard for the safety of everyone else on the road.

With our kind request out of the way, go ahead and watch the video to see just how quickly the Bentley can sprint to an immense velocity. Even then, the driver does not stick to the leftmost lane (the passing lane, mind you) while the one on the right is open.

The described scenario is just one of the reasons why Germany's autobahns are safer than highways with strict speed limits, while some people drive at ridiculous speeds on those autobahns. The word we are looking for here is discipline, and each driver should have it when it comes to driving. 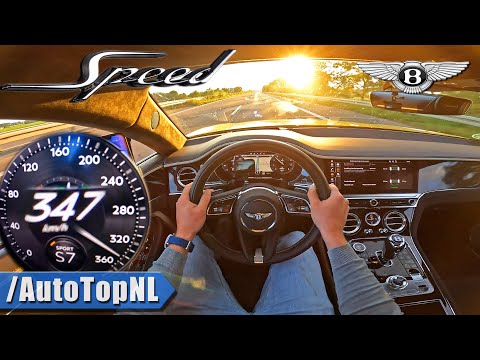