4 Audi to Kill Combustion Powered Cars; Last One Will Be Made in 2026

A few days ago, Audi gave us the first look at the camouflaged prototypes of the 2022 RS3 Sedan and Sportback through a massive Audi Sport car meeting. Now the automaker is using technology to further entice the fan community to the impending arrival of its high-performance compact cars. Better yet, Audi is also introducing the RS Torque Splitter.
40 photos

We have seen BMW M and Mercedes-AMG equip their AWD cars with features that allow them to perform drifts as if they were rear-wheel drive all over again. Now it’s time for the Ingolstadt-based rival to follow suit as the company signaled the upcoming arrival of their first-ever production RS Torque Splitter. This system allows “fully variable torque distribution on the rear axle.”

The automaker also confirmed the RS3 siblings would keep the five-cylinder engine, but that was a bit obvious since the cars have a special camouflage pattern that proudly shows the mill’s cylinder firing order. Like with the past RS3 teaser, the prototypes are just the background for the discussion around the new technology.

It has been developed and tested on the Nürburgring Nordschleife and submitted to grueling reliability trials that included a couple of self-contained continuous 8,000-km (almost 5,000-mile) runs. According to the company, the RS Torque Splitter delivers “fully variable torque vectoring between the rear wheels” and helps to balance the car during high-speed cornering.

It does so by using either of its two electronically controlled multiple disc clutches to deliver more torque to the wheel with the higher load, thus reducing the AWD’s inherent tendency to understeer at the limit. Better yet, “when driving on closed roads, the torque splitter enables controlled drifts by applying all of the engine power at the rear axle to just one of the rear wheels – up to a maximum of 1,750 Nm (1,291 lb-ft).”

That would be courtesy of the new RS Torque Rear mode. At the same time, Audi also promises an adjusted engine and transmission setup for the RS Performance Mode, which is not only designed for the racetrack but also intelligently reacts to the road conditions. For example, in combination with the Pirelli P Zero “Trofeo R” performance semi-slick tires, it will react differently when the road is wet or dry. 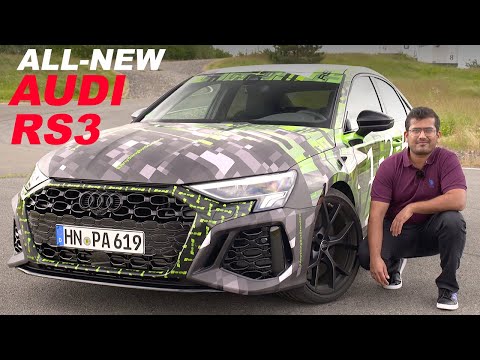