Hardly a secret, considering that Audi itself teased the return of the mighty five-cylinder 2.5 TFSI, the Ingolstadt-based automaker took the wraps off its third-generation RS 3 Sportback and second-generation RS 3 Sedan. For now, in European specification, complete with all the juicy details, pricing, and the approximate date of arrival.
11 photos

One can already order the 2022 Audi RS 3 Sedan and Sportback if you live in Europe, but the performance fun will have to wait for later during the fall. As far as pricing goes, the hatchback costs exactly €60k (which is almost $71k according to the exchange rate), while the classic sedan is being listed starting in mid?July 2021 for €62,000 – which equates to around $73k.

For the cash, Audi is promising a lot of things. Such as the “expressive exterior design and interior racing atmosphere.” Also, a 62 mph (100 kph) sprint in 3.8 seconds, up to 180 mph (290 kph) for maximum speed - with the optional RS Dynamic package, the new RS Torque Splitter, semi-slick tires, and more. More means just torque, though. But at least the 2.5-liter TFSI five-cylinder engine soldiers on for another generation.

So, in Europe, the hp rating remains the same at 400 ps / 395 hp (the rumor mill promises a 401-hp surprise in the U.S.). Instead, there’s a slight uptick to 500 Nm / 369 lb-ft, compared with 480 Nm / 354 lb-ft for the predecessor. It might be enough for some, as the Ingolstadt-based manufacturer also promises a faster response along “with a highly intoxicating sound.”

As far as the styling is concerned, we’re noticing an uptick in dynamism – which is a breath of fresh air considering the usual (ultra-subtle) treatment of Audi models. The RS 3 siblings are easier to make out in a crowd now, including due to their technical gimmicks (optional Matrix LED headlights have RS 3 spelled and a checkered flag on the driver’s side), not just the design traits.

The boxy fender flares are probably the best, especially since they remind us of the original Audi Quattro. Speaking of, the quattro all-wheel-drive system is of course present. Along with the seven-speed dual-clutch transmission and all-new RS Torque Splitter for some nice torque vectoring and even some drifting, thanks to the embedded mode.

Inside, Audi promises a “genuine racing feeling” that blends nicely with the expected creature comforts and functionality. For example, the standard 12.3-inch Audi virtual cockpit plus instrument cluster has an RS Runway feature, while the 10.1-inch touch display comes with an RS Monitor, among others. 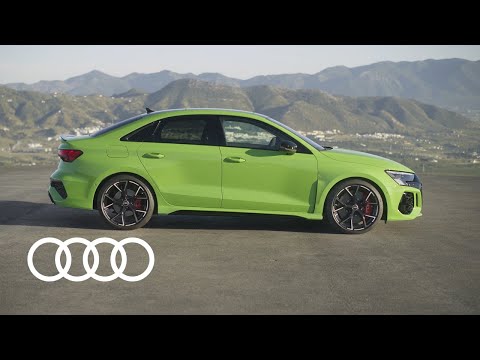