Despite the woeful quality issues that hamper down pretty much every Tesla in production today, the Model 3 Performance is one hell of a car. Previously based in Palo Alto, the Austin-based automaker made EVs cool by infusing performance into them like no manufacturer before or since.
11 photos

Currently available from $58,990 with a February 2022 delivery estimate, the Model 3 Performance offers up to 315 miles (507 kilometers) of driving range and a top speed of 162 miles per hour (261 kilometers per hour). The most impressive thing about the M3P, however, is the way it accelerates.

Tesla quotes 3.1 seconds to 60 miles per hour (97 kilometers per hour) from the dual-motor powertrain with the current software, which is hella impressive for a five-seat electric sedan that weighs 4,079 pounds (1,850 kilograms). A car in a league of its own, the M3P doesn’t break a sweat racing the brand-new Audi RS 3 Sportback over the quarter mile.

The green-painted hatchback in the following video is quite a bit lighter at 3,461 pounds (1,570 kilograms), and it’s pretty darn powerful for a compact due to 2.5 liters and five cylinders of TFSI magic. The force-fed engine turns gasoline into glorious music for any car enthusiast’s ears, and in this application, it also develops 400 metric ponies and 500 Nm (369 lb-ft).

Instead of a rear-axle differential and a multiple disc clutch package, the RS 3 now comes with a torque splitter and two electronically controlled multiple disc clutches for better handling characteristics. But handling isn’t of the essence in a straight-line showdown where the M3P flexes its muscles harder due to the instant torque produced by the car’s electric motors.

Be that as it may, the RS 3 has the upper hand from a roll. The American interloper gets passed before the one-mile mark, and who could argue with that? After all, the seven-speed S tronic dual-clutch transmission allows the Audi to stretch its legs to 290 kilometers per hour (180 miles per hour). 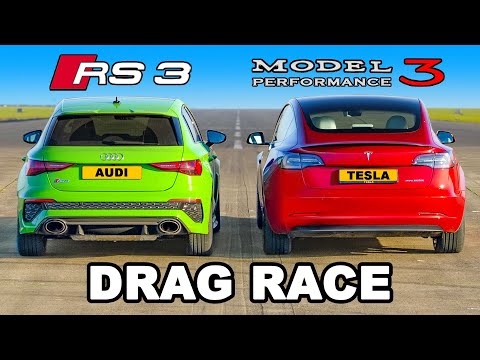