Be that as it may, it also happens to crank out 375 horsepower and 391 pound-foot (530 Nm) thanks to a slightly larger engine gifted with two spinny lads instead of a single turbo. Available with two- and three-row seating, the GV80 is rocking a Hyundai Transys eight-speed automatic transmission versus a ten-speed auto developed in-house by Honda.

Given these numbers, have a wild guess which is faster in the quarter mile. If you went all in on the GV80 3.5T, tough luck because the MDX Type S makes easy work of the South Korean alternative off the line and over the finish line. From a roll, however, the Genesis and Acura are right beside each other from 32 mph to the quarter-mile finish line in auto mode.

Starting from second gear ends with a dominant win for the MDX because of the GV80’s disobedient transmission. Upping the starting speed to 50 mph ends with a photo finish. “I gotta say both cars [are] kind of within the same speed. In terms of the comfort, I’ve driven both and I have to say the Genesis for me feels a bit more comfortable,” said Sam CarLegion. 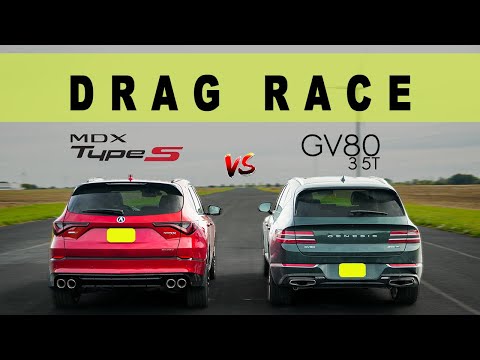