While Volkswagen has just updated the Polo range for the 2022 model year, the slightly refreshed series (taking cues from the Golf 8, naturally) still has a long way before hitting dealerships. But before fans get the chance to check out its credentials, here’s the non-updated Polo GTI making an appearance for a bit of high-speed Autobahn fun.
26 photos

Surely enough, unless one counts itself among VW connoisseurs, the changes operated by the German automaker to the 2022 Polo will mostly go unnoticed across the general audience. Some may even confuse it with the eighth-generation Golf from a distance, given the shared styling DNA across both the rear and front—most noticeably the taillights or the newly introduced LED strip up front.

Unlike the 2022 VW Golf R, which is reportedly underrated in terms of raw power, this Autobahn top speed trial performed by the AutoTopNL YouTube channel goes a long way to prove the subcompact probably doesn’t hide additional ponies under its smaller hood.

Given that it’s the sensible urban-dweller GTI of the performance family, we’re not disappointed by this detail. Instead, we have a different niggle, which may or may not be caused by the Polo GTI's suspension setup (it could also be the fault of that particular stretch of highway). As always, the folks over at the Dutch YT channel provide us with the cool POV perspective, and we’re quite surprised—not by the speedy passage of trucks and other cars but the vehicle’s rather bumpy ride.

All in all, even though after 200 kph (124 mph), it takes like forever to hit the 240 kph (149 mph) threshold seen in the footage embedded below, it’s not a shabby performance from the little hot hatch. Besides, this particular ride also comes with a set of badass (most likely aftermarket, probably fake) paddle shifters. 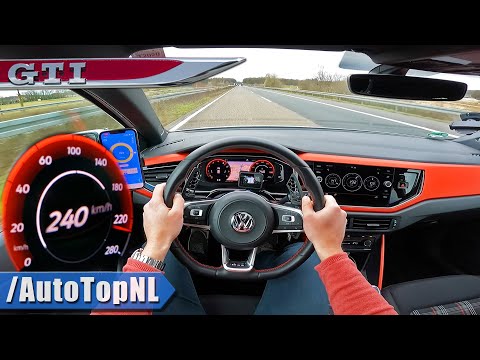