1 2021 Dodge Durango SRT Hellcat “Excess” Review Has It All, Including McDonald's

Vlad Mitrache
Each day we wake up expecting to find a press release from BMW's design department titled "We Told You So," in which they scold the entire media for doubting their decision to go for that massive grille.
10 photos

More and more people (ourselves included) are warming up to its looks, but we still feel it only really works on the M4 and not so much on the regular 4 Series. We might eventually come around that as well, but that day hasn't come yet. And even when it does, we still have one ace to play against BMW's design department: the iX electric SUV. That's probably the only thing keeping them back from publishing the fictitious press release we mentioned earlier.

If you're still not convinced about the grille, take this 2019 BMW M4 Competition owner's word for it. John, as he's called, hated the bucked beaver teeth as much as anyone the first time he saw them, especially when he looked at the perfectly fine F82 BMW M4 in his garage. Now, though, he thinks the newer G82 is the better looker out of the two, which is a massive thing to say considering his previous stance.

Subjective matters aside, the G82 does indeed trump the previous-gen M4 Competition very convincingly. They both use 3.0-liter straight-six twin-turbo engines, but they are different units: S55 for the older model and S58 for the new one. The difference between their names may only be three, but the performance gap is massive.

One thing that could stack the cards in the F82's favor is its seven-speed dual-clutch transmission, though the G82's eight-speed automatic should be capable of pretty snappy gear changes itself (the advantage can easily be seen in the first rolling race where the cars' transmissions are left in fully automatic mode). All in all, it looks as though the 2021 BMW M4 Competition should be the favorite in this comparison regardless of the challenge.

Speaking of challenges, the two Bimmers will have to compete against each other from a distance as they set hot lap times on a tight handling course before moving on to the reason why we're all here: the standing and rolling drag races. You know where to click. 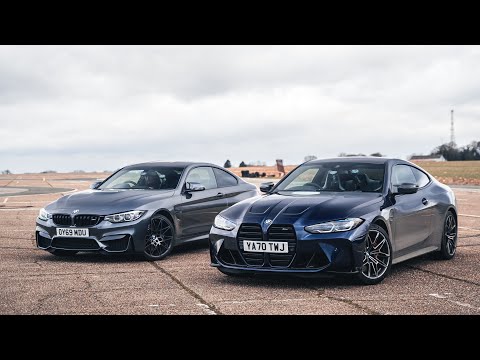