2 It Would Be “Criminal” to Discontinue Autopilot After Crashes, Sandy Munro Says

U.S. Military Aircraft to Get Deadlier Than Ever With New Sensor Technology

Vlad Mitrache
We've had cars around for more than a century and electric motors for even more than that, so we should know by now what's the best way to make both of them.
8 photos

That leaves the battery pack as the most important component of a modern EV, and it's definitely where the competition between different brands is the fiercest. Get that right, and you can go for extended high-intensity discharges (what Porsche is doing for the Taycan), quick recharge times (again, Porsche, but definitely also Tesla), or just the good old maximum range that quiets any potential anxiety (this is where Tesla shines, at least according to the EPA).

However, getting it right involves a combination of hardware (battery pack size, cooling, assembly, ease of access) and software (battery management is key), and there is still definite room for improvement for every manufacturer on the market.

Most EV buyers will get their cars and never think twice about the battery, other than the range it provides and perhaps how quickly it degrades over time. It's a good thing we have Sandy Munro, then, who's more than willing to strip a new car of its pack and open it up to show everyone what's inside.

A host of EVs have received this treatment so far, and now it's time for the 2021 Volkswagen ID.4, the only all-electric offering from the German manufacturer available in the U.S. Sandy starts things off by comparing the weight-to-capacity ratio of the ID.4 to that of other popular EVs such as the Chevrolet Bolt and the Tesla Model 3 and Model Y.

The comparison is a bit irrelevant since he doesn't mention whether we're talking total capacity or usable capacity or exactly what kind of Model 3 or Model Y we're looking at. Anyway, the ID.4 comes off as having the heaviest unit and the highest capacity. Even so, Sandy seems to ignore that and focuses on the 50 kg (~110 lbs) weight difference between the VW's battery and the Tesla Model Y's.

The first thing he does is quickly go over how the ID.4 battery is laid out, and he seems to have almost nothing bad to say about it. However, because of the weight, he decides to think about ways in which it could be made lighter and also reduce the overall cost of the car in the process. He says that with EVs, saving one kilogram (2.2 lbs) reflects in a $10 drop of the manufacturing costs, so shaving off the 110 lbs would mean an economy of $500 per car for Volkswagen.

He talks about replacing the aluminum casing with a strong composite polymer to reduce weight and costs (both through making the vehicle lighter and using a less expensive material). He also looks at the side protection and says it could be replaced by carbon fiber elements.

We're no experts, but this is what we know: carbon fiber can indeed be very sturdy, but when it gives way, it does so spectacularly by breaking into shreds and losing any structural integrity. It's not particularly good at absorbing energy through controlled deformation, in the sense that it can't do it at all, so why would anyone want it used for collision protection is beyond us.

Besides, Mr. Munro ignores another important factor, and that's recyclability. You can take the aluminum and use it again and again, whereas the polymer can only be downcycled at best. However, if you look at the partner of the video, you can understand Sandy's fixation with these materials: it's SABIC, "one of the world's largest polymer suppliers." That explains it. Had it been one of the world's largest aluminum suppliers, the video's narrative probably would have been totally different.

At the end of the day, what we should take away from this clip is the fact that Volkswagen appears to have designed and built a very neat battery pack using quality materials and clever engineering solutions. It probably highlights the difference between a mammoth carmaker with lots of experience and a reputation to keep (VW) and one that's still looking at every possible way to reduce costs because every cent literally matters when you're expanding (Tesla). Luckily, we're free to choose whichever we want, and now that Sandy Munro popped open the ID.4's battery, we can do it having even more knowledge of what lies underneath. 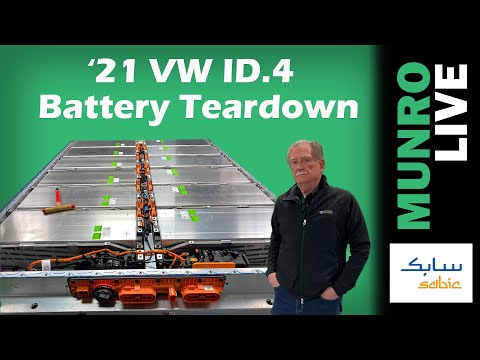