4 The 2018 Golf GTI Is Still Better Than the Golf GTD and GTE
Car video reviews:
Coverstory

Not since 2013 did Volkswagen have such a strong batch of new and interesting hatchbacks in Europe. But how does the new GTI stack up against its sister cars, the 2021 Golf GTD and GTE?
5 photos

Meanwhile, the GTE is still powered by two types of motors, but power has risen to match the GTI - and I think they're using a better gearbox too. This acceleration comparison test from YouTuber Automann TV will reveal if the GTI is still the head of its household. This seems to be an especially important question to the German viewers who might be looking to make a purchasing decision over the holidays. Our American readers are sadly denied the GTE and GTD, while the launch of the Mk8 GTI is still pending.

According to the man with the famous knit&leather gloves, they have completely different characters. The GTD still suffers from a narrower power band but is a fuel-efficient autobahn cruiser. Its measured 0 to 62 mph (100 kph) time of 7.7 seconds is slightly disappointing given the output. The diesel seems to have even less puff after that, as 62 to 124 mph (100-200 kph) takes 20.6 seconds. It's not horrible, but we'd keep that engine in the Golf wagon family.

The GTE is a little bit quicker due to the response of the electric motor. The plug-in hybrid model is way quicker, needing 6.5 seconds to complete the sprint to 62 mph (100 kph). Basically, you have a chance of keeping up with an old Focus ST. It's even quicker than the GTD when it comes to the 124 mph (200 kph) sprint. 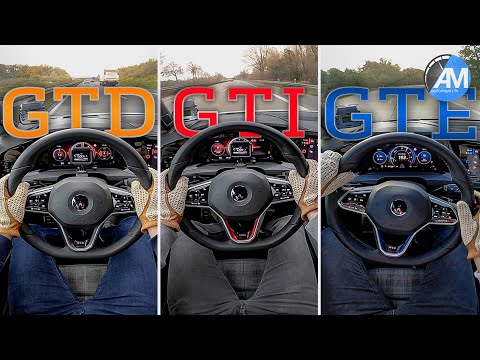