Mihnea Radu
We still can't get around the fact that there's a brand new 2021 Volkswagen Golf GTD. That's right, a Golf hot hatch that runs on diesel, and it just came out. How do you justify printing brochures for that? It's a pretty nice car, actually, if you're into that kind of powertrain.
15 photos

The GTD was, at one point, rumored to come to America. During the Mk6 era, they brought test prototypes for journalists to check out. Well, this Mk8 model makes the last two generations seem slow and bland.

The 2.0 TDI remains one of the most popular engines in Europe, and it's now even more important since the 1.6 TDI was phased out from most models. And the GTD packs the most power available with only one turbocharger: 197 hp (200 PS).

Indeed, it packs more heat than any European diesel hot hatch, not that there are many of those around. But you can get 187 hp from a Ford Focus ST, as well as the competitive BMW and MINI models. Obviously, acceleration is not the same as in a GTI, but it makes more sense if you're buying the Golf wagon, where hot hatch tech isn't otherwise obtainable (except for the R model).

This POV test drive from AutoTopNL gives you some idea of what it's like to be behind the wheel of the 2021 Golf GTD. It seems to have progressive steering, fake exhaust sound pumped into the cabin, and some sporty digital dials—everything you'd need to pretend you're in a real hot hatch.

Volkswagen paid a heavy price for cheating on its diesel tests. But despite the whole "Voltswagen" thing going on, the German automaker hasn't fully given up on diesel engines. And the Golf GTD is like that mistress it keeps whenever VW is "out of town for business."

But it's not even that dirty. The TDI has been fitted with a double-dosing of AdBlue, supposedly making its exhaust gasses the cleanest in its class. Even so, Euro 7 emissions targets are expected to come into play in 2025, and we can't imagine the GTD surviving after that. 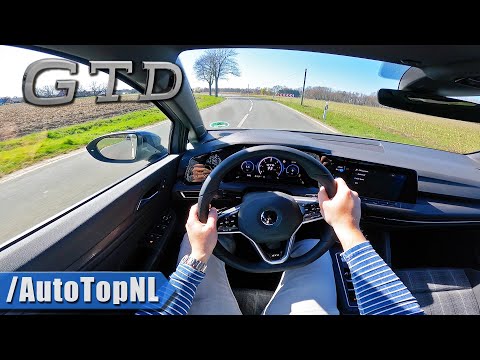