Mihnea Radu
The all-new VW Golf 8 R is less than a week away from making its official debut. Ahead of that, we're sharing a fresh spy video that seems to suggest it's going to be offered with a manual gearbox, which is important for several reasons.
5 photos

Together with the Audi S3, the Golf R created the foundation of the modern AWD hot hatch segment, and they were instrumental in making DSG gearboxes very popular. The segment is currently quite crowded with rivals, mostly thanks to AMG, and all of them rely on some form of automatic. You can't buy an A 35 with a stick-shift, but Volkswagen still offers one for some reason.

This Nurburgring spy video suggests the 2021 Golf R has a manual. There's a trademark way in which the revs drop for longer when people are in charge of changing gears. So why is VW offering a manual?

First of all, because they can. The Golf R has a good chunk of sales volume, and having a manual gearbox sets it apart from rivals. Second, it makes the car cheaper to buy by about €2,000+, which mostly plays a part in online advertising.

Also, most Golfs with manuals have slightly lower CO2 emissions than their DSG counterparts, and that's crucial when the EU is cracking down on dirty cars. And finally, it's possible that the gearbox makes the Golf R faster.

Sure, a DSG will always win drag races, but the manual can be quicker on the track. It gives you more control and makes the car lighter by a good chunk. Mind you, we're talking about race car drivers, not average folks. From about 2015, the Leon Cupra, which is related to the Golf R, set a bunch of Nurburgring records, and if we remember correctly, all of them were done by Jordi Gene with a 6-speed stick. 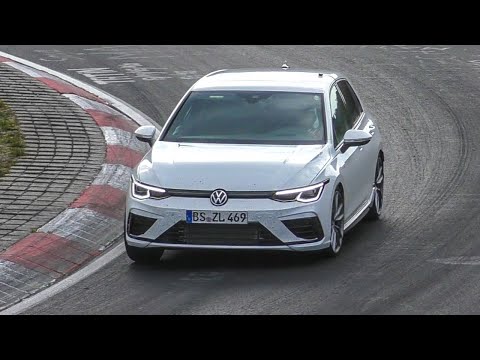