2 Have $15K? Find a Used Ambulance and Transform It Into a Mind-Blowing "Campulance"

4 Dembell Motorhome Wants You to Travel Like a Gentleman, Redefines Land Yachting

5 Oasi 540 Camper Proves That Less Is More, Offers Luxury RV Travel in a Tiny Package
Car video reviews:
Up Next

Volkner Mobil was already in the history books as the company making some of the most luxurious and outrageous RVs in the world, but this was clearly not enough. It’s now boasting the unofficial record for the most expensive luxury motorhome in the world.

2021 Volkner Performance S Is a $7.7 Million Landyacht, With a Bugatti Hidden Away

The 2021 edition of the Düsseldorf Caravan Salon is now underway in Düsseldorf, Germany, and it’s the place where Volkner Mobil, a German landyacht maker, debuted its latest model. “Unit” is a more appropriate term since this is the same Performance S model introduced in 2019 but now outfitted in the most outrageous, incredibly luxurious fashion.

We discussed the Performance S model at length in a separate coverstory. The latest unit deserves its own because it is quite possibly the most expensive landyacht in the world, with Volkner pricing it at €6.5 million, which is a hair under $7.7 million at the current exchange rate.

In case you’re wondering what a motorhome could possibly offer to be priced as much as a proper, on-land mansion, you’re not the target customer for Volkner. The family-based business, which has been in the conversion business for close to a decade, has made a reputation out of delivering premium quality landyachts that defy expectations in absolutely every way. It’s also in the habit of dropping jaws, which is exactly what it did with the new Performance S, since it comes with a Bugatti Chiron in the side garage.

Because it’s targeting a very specific (read: impossibly wealthy) client, Volkner doesn’t make production series units. Instead, it starts from a base layout on a 460-hp Volvo or 430-hp Mercedes-Benz chassis, which costs €1.5 million (roughly $1.8 million) and that can then be further customized to the client’s liking and budget. For this year’s model, pricing for the base model has gone up and now sits at €1.6 million ($1.9 million). That’s not even the most outrageous thing about it.

As the video below and the photos in the gallery show, this year’s Performance S comes with a Bugatti Chiron in the patented Volkner garage. The car itself accounts for some $3 million of the final price tag, and helps the Performance S snatch the title of world’s most expensive motorhome. Volkner calls it the perfect dinghy to your landyacht because, what do you know, you can’t have a yacht without a tender, even if it’s on land.

The garage also offers storage for two fat-tire e-bikes and there’s a separate compartment for two more bikes. The garage or, better said, the hydraulic platform can be used as a veranda for outdoor dining when the car is not in there, or for storage for garden furniture when the weather takes an unexpected turn. Or, you can use it as your personal man cave, since it has AC and heating, in addition to offering protection from the elements.

Other standout features include a custom Burmester audio system, which has been created specifically for the motorhome and is priced at €300,000 ($355,000) alone. The interior is incredibly lavish, though the layout is the base one, with a lounge slash living room slash dining room up front, a full kitchen, a full dry bathroom, and a separate shower room with a rain shower and starry roof, and the bedroom in the back. “BrilliantBlack” veneer combines with real leather in warm off-white and plenty of glass to create interiors as decadent and elegant as anything you’ve seen in five-star hotels.

Like the base model of the Performance S, this one too comes with a slide-out that goes from front to rear on the driver side, adding even more space to the already spacious interior. That said, features in each room remain usable even with the slide-out tucked in. Multi-zone heating, an almost industrial-grade kitchen, computer workspace, and vast amounts of storage space in the bedroom and dining cabinetry turn this motorhome into a proper home. A mansion, but on wheels.

A lithium battery bank, 2,000-W rooftop solar panels, 8-kW generator, and separate holding tanks for fresh, gray and black water make the Performance S off-grid capable for longer stretches. You know, if your idea of going off-grid somehow involves the phrase “let’s take the Bugatti out for a spin.” When you have $7.7 million to spend on a vacation vehicle, anything is possible, really. 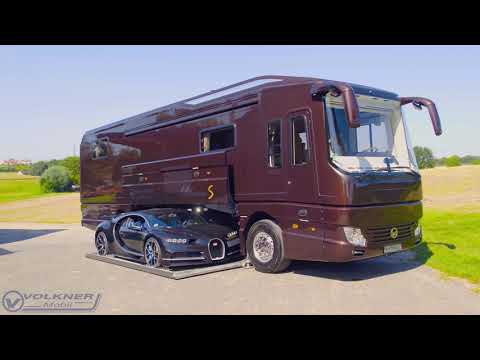