4 Toyota Supra Gets a Taste of Manhart’s Aftermarket Goodness

Mihnea Radu
If this car review was an Xbox mission, it would say something like "Achievement Unlocked: Meet the Ancestor" or something like that. Every JDM car fan should want to complete it and see how a modern 2021 Toyota Supra compares to its iconic predecessor.
5 photos

Through the magic of Fast & Furious and a million street races of 1,000 horsepower 2JZs, the Toyota Supra became a legendary car. In fact, we'd argue there are few if any Japanese cars from that era which are as famous. But the 2021 Supra is something completely different. How different? Let's find out.

The hero of this Throttle House comparison has to be the A80 Supra. Seeing one of these with just slight modifications is pretty rare. The JDM-spec 1994 sports car brings near untarnished 276 horsepower to the table, meaning we get to see the real generation gap.

Its much younger rival is a 2021 Supra, meaning the engine is making almost 100 horsepower more. This detail is often lost between all the complaints about it using a BMW engine and platform. Of course, any statement about a legendary sports car is controversial, including the one we just made. We know that fans of the Mk IV will argue that it's so much better than its successor.

Unusually, this conversation can also be translated into a buying decision. A previous-gen BMW M3 or C63 AMG are already about a third of the price of a new model. But because the Supra is such an icon, this 1994 example ends up costing about the same as its 2021 counterpart. And which would you have?

Before we let you watch what's left of this video that we haven't spoiled, let's show our appreciation for Throttle House's video editing. That intro, where the guys are pretending to select cars in a real-world video game is something every NFS or Gran Turismo fan wants to see, and it's so hard to do. 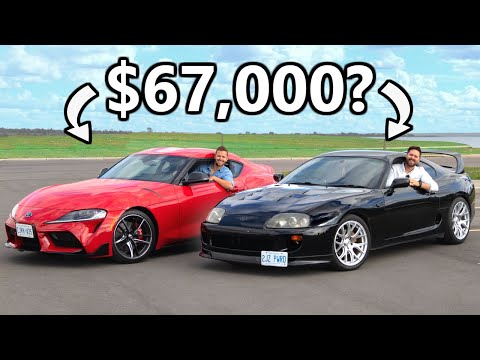