3 Widebody Lexus LC500 "Banana" Rendering Is for the Speed Junkies

Mihnea Radu
The 2020 Toyota Supra went on sale last year and quickly became the most talked-about sports car. Toyota USA just released the second model year of the model, and there are changes under the hood.
4 photos

The Supra was always supposed to have smaller engines. The platform is shared with the latest BMW Z4, which is the engine benefactor, plus leaked documents from several years back suggested the European or Japanese models could go even below 200 horsepower.

The official specs are here, and in America, the four-cylinder model called the Supra 2.0 makes 255 horsepower plus 295 lb-ft of torque. Toyota claims this will be enough to go from 0 to 60 in 5 seconds flat, which is the same as the BMW Z4 30i.

Traditionally, Japanese sports cars with downsized engines or automatic gearboxes are usually ridiculed. However, we don't see anything wrong with what Toyota is offering.

The Supra 2.0 is not another front-wheel-drive hot hatch, and because it's over 200 pounds lighter than the 3.0-liter, handling should be pretty sweet. However, one artist believes the models should be set apart.

Almost every other type of car would have some noticeable change to the bumpers in this situation. I mean, just think about the differences between a Golf GTI/R or the upgrades made to an M550i over the regular 5 Series.

The Sketch Monkey proposes three substitute looks for the Supra 2.0. All of them seem to be inspired by the simplicity of the old Supra model and have a gapin grille that goes almost the width of the car.

Some of them are sportier than the GR Supra, but we like how none of them resemble any other sports car. The long-nosed banana from Japan could have ended up resembling a Corvette or a Lamborghini in this situation.

Our favorite design is the 3rd (from the Instagram post). The opening is the smallest, which feels natural for a base model, while the splitter is also the bottom of the bumper, which is very interesting. 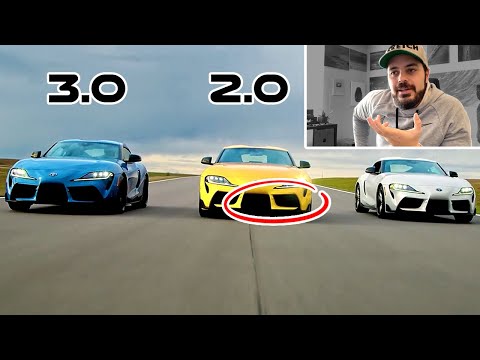 The 2021 2.0 Supra looks identical to the 2021 3.0 Supra. Decided to change that. Could barely fit them all into the IG frame, tight! Video on my thoughts of the new models on my @youtube - TheSketchMonkey