1 Audi Q4 e-tron Interior Revealed in Spyshots, Looks Nothing Like the VW ID.4

3 A Closer Look at the Cupra Formentor Powertrains

The Skoda Octavia RS, otherwise known as the Golf GTI for dads who don't actually do that much racing, is now entering its 4th generation. Like in the case of the German cousin, they've carried over with the same 2.0 TSI, a turbocharged four-cylinder that puts out 242 hp (245 PS).
1 photo
The Octavia RS will come with three types of powertrain, not two like before. In addition to the TDI model and this TSI, there's also an RS iV plug-in hybrid that's also making 242 hp. But we'd stick to the gasolene-powered model, and we'll explain why using the video below.

The 2.0 TDI makes 197 hp and is obviously going to be more frugal, but it won't be as enjoyable to rev out. During the acceleration video shot by Automann-TV, you'll notice how the TSI motor builds up power all the way to about 7,000rpm. Sure, there are a lot more exciting cars you can buy for the money, but Skoda has made an excellent all-rounder.

It's pretty economical too, plus the interior is a major upgrade. you've got Alcantara inserts with red stitching, some fake carbon, floating infotainment, and a quality feel. Honestly, it puts the GTI to shame, as you'll see in the second video below, a nocturnal presentation.

Despite being equipped with winter tires, the Octavia RS managed to clock a 0 to 62 mph (100 km/h) time of 6.6 seconds on the Autobahn. Sprinting all the way to 124 mph (200 km/h) takes 22.6 seconds. So with summer tires, it would be decently fast. As a reminder, the old RS, which had the same engine, did quite well in a drag race against hot hatchbacks like the MINI JCW and i30 N.

It's worth noting that the sound you think is coming from the exhaust is actually produced by the Soundaktor (German for "sound actuator") system located under the dashboard. When the car is in comfort or normal mode, it's switched off. 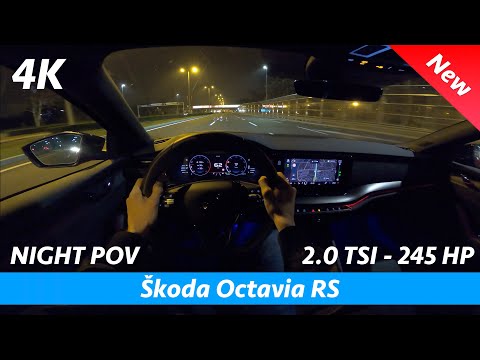