1 2021 Ram TRX Street Drags Against Lambo Urus, Care to Guess the Size of the Gap?

Not that we're complaining, but you do feel like the world of YouTube has gone a little bit crazy. How else can you explain somebody jumping a brand new TRX for no other reason than fun - and maybe views?
8 photos

It's a competitive world out there, and garnering a collection of subscribers takes a lot of effort. You can organize drag races, but there are dozens of other channels that do the same thing. You can make said drag races weird, but others are doing that too. Finally, you can do some crazy stuff that will most likely damage your vehicle, not to mention potentially hurt yourself as well, but is more likely going to make for original content.

We all know the TRX is a beast, but we've only seen it either going fast or going off-road (and sometimes doing both at the same time). Not for one moment did we stop to ask ourselves: "alright, but how high and, more importantly, how long can RAM's new performance truck jump?"

That's what channels such as Street Speed 717 are for; God bless them. The black T-Rex had no idea what was going to happen that day as it sat quietly on the hard pavement of the driveway, but it must have sensed something was off when Mike loaded a set of wheels in its bed for no apparent reason. He also strapped them down, which was weird. Adding a dumbbell as well made even more sense, so its senses must have been on high alert.

And for good reason; like the Raptor it shared that driveway with before it, the TRX was about to experience a pretty gnarly jump. The extra weight at the back was there in an attempt to balance the nose-heavy truck, though whether it would be enough or not remains to be seen.

They take the RAM to the same place where the Raptor pulled the stunt, except they don't fully account for the extra power generated by the supercharged V8 in the FCA truck. As Mike says, just before the jump, he floors the throttle to get the vehicle's nose up and make sure he doesn't come down head-first. As a side effect in the TRX, that means he also gets the speed up to well over 40 mph (we can read a 62 mph, but that might have come once the wheels had left the ground, so it wasn't an accurate speed read).

The public gets the jump it was hoping for, which is the most important part, right up there with the fact that nobody gets hurt. After that, it's time to inspect the damage suffered by the truck. At first, it seems as though a seriously bent skid plate and a deformed front bumper are all they have to worry about. However, as they go around the back, they realize a few other things are going to need fixing as well because those tires in the back wreaked some havoc. And that's before any serious inspection of the suspension system, so who knows? 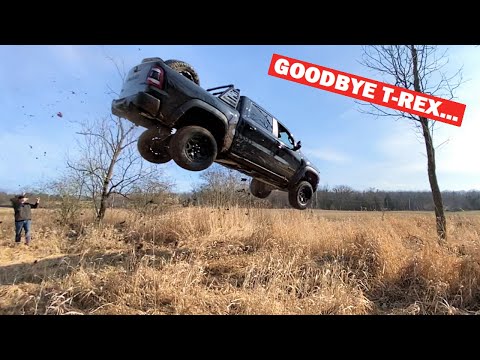