Judging by the influx of compact crossovers on sale today, one wouldn’t consider the segment was just as barren as a desert back in 2006 – just prior to the arrival of one Japanese model that was named after a people living in the mountains of Iran. After the Nissan Qashqai (Rogue Sport in the U.S.) entered the market as the make’s compact offering in lieu of the Mistral/Terrano II, nothing remained the same – as in the market for compact crossover SUVs simply exploded.
15 photos

With enough time to acquire a measure of heritage, the Japanese automaker is now carefully preparing the field for the upcoming third-generation arrival, scheduled quite distantly into the near future – for the spring of next year.

To say the Qashqai / Rogue Sport is an important model for Nissan (especially during these dire times) is not even an understatement. It’s more than that, considering the automaker sold more than three million units of the first and second generations models in Europe alone. So, the continued success on the Old Continent is adamant to the carmaker’s ailing fortunes.

By the looks of it, the latest iteration of the Qashqai will be a spare-no-expenses affair – packing the Alliance’s latest CMF-C architecture and bringing electrification to the series via the e-Power system. Already, prototypes of the crossover (some of them caught by our spies) are being tested on the Old Continent, with Nissan officially presenting them for the model’s teasing campaign.

We’re still months away from the actual spring 2021 model introduction (first deliveries are also scheduled for next year, though further details on the timing haven’t been released), but already Nissan is sharing important details.

The 2021 Qashqai will be Nissan’s first European model underpinned by the Alliance CMF-C architecture, has been designed by the Nissan Design Europe team, and comes with technical innovations – such as the use of a composite rear hatch door (2.6 kg / 5.73 lbs. lighter), or the increase in use of ultra high-strength steel by 50%.

Its front / rear doors, front fenders and hood are made of aluminum, further dropping the weight by 21 kg / 46.29 lbs. - total savings for the “body in white” reach 60 kg / 132.27 lbs. while rigidity has gone up by 41%. The new Qashqai is also set to arrive with an upgraded suspension setup, which makes use of separate rear setups for 2WD (wheels up to 19-inch) and AWD models.

Best of all, we’re already being told what’s going to be hidden under the hood – a 1.3-liter mild hybrid gasoline engine or Nissan’s new e-Power system. As far as the 1.3-liter is concerned, which is going to be offered with two power levels, the MHEV system is a mixed affair – it uses a 12V system as opposed to the general trend of 48V, but at least the battery pack has lithium technology at its core.

Meanwhile, the 2021 Qashqai will be the first European model equipped with e-Power technology, as well as the latest generation of driver assistance tech – including the upgraded ProPILOT with Navi-link system (starting with the mid-level N-Connecta trim). 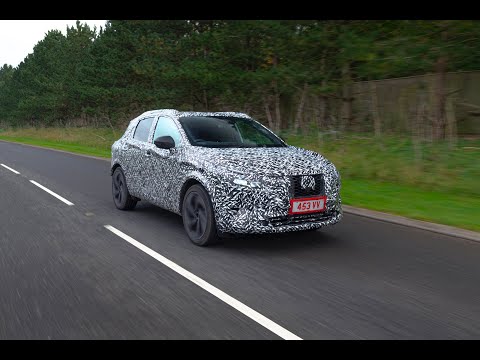