5 Holden Captiva 7 Gets Five-Star Safety Rating in Australia
Car video reviews:
Up Next

Known as the Renault Trafic in Europe and the UK, the Mitsubishi Express isn’t your regular badge-engineered van. It’s an unsafe van as well, according to the ANCAP, which stands for the Australasian New Car Assessment Program. As the headline implies, the safety organization has rated the commercial vehicle zero stars for its crash-test performance.
11 photos

Why did the Express fail so badly? Active safety is completely lacking, but that’s only half of the story. The panel van in the following video “also delivered marginal performance in physical crash test and lacks basic safety features that consumers have come to expect in a newly released model.”

ANCAP highlights that autonomous emergency braking and lane support systems are not offered, resulting in a Safety Assist score of 7.0 percent. Adult Occupant and Vulnerable Road User Protection are deemed low, which goes to show that Mitsubishi takes cost-cutting to the next level.

In the frontal-offset, full-width frontal, and oblique pole crash tests, the driver of the Express may be subjected to serious injuries to the chest. A penalty was also applied for potential hard knee contact points. Another worrisome result comes in the guise of significant deformation of the side door in the side-impact and pole tests, which may result in partial ejection.

ANCAP further highlights a high risk of neck injury during the whiplash test due to the head restraints' poor design. By the way, the Express doesn’t have a chest-protecting side airbag on the passenger side, a frontal airbag for the center passenger, or a center airbag for side-crash protection.

It’s borderline shocking how bad the Renault Trafic-based Express performs, and the zero-star rating will hurt the Japanese manufacturer because it’s ineligible for purchase by a wide range of customers that require better results.

“Mitsubishi can deliver vehicles with high levels of overall safety and a wide range of modern safety technologies,” said chief exec Carla Hoorweg. “We encourage them to accelerate the introduction of these features.” 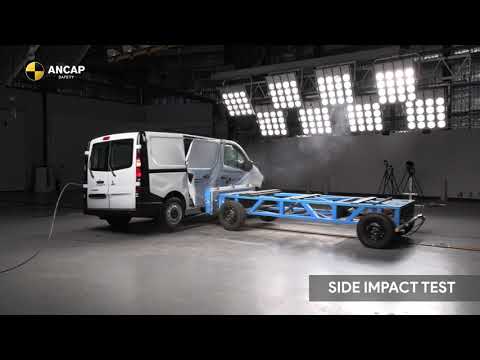