Mercedes-Benz has been working on the fifth-generation E-Class mid-cycle facelift for over two years, and we're now just a little over a month away from the model's official unveiling at the 2020 Geneva Motor Show.

We pretty much already know how the refresh will look on the non-AMG E-Class W213 thanks to the car's exterior design being mistakenly shown during a preview drive in Las Vegas.

The 2021 Mercedes-AMG E 63 and E 63 Autobahn-storming twins (and their station wagon counterparts) are a different breed altogether, though, and they are expected to be unveiled around summer, closer to the Paris Motor Show.

The two AMG brothers will also get their fair share of visual and technical modifications to keep them relevant in the continuously changing “sledgehammer sedans” segment, although some of the upgrades will actually be for the worse instead of the better.

We should probably start with the good stuff, though, not only because there's plenty of it but because some of it is truly game-changing.

While the M177 twin-turbocharged V8 powering the current models is a marvel of technology in its own right, with plenty of oomph and animalistic sounds coming from its exhaust, it does need a fair bit of upgrades to remain a force to be reckoned with.

Its main disadvantage is by far the atrocious fuel economy, even though it more than makes up for it with waves upon waves on unrelenting torque.

Until Mercedes-AMG engineers finish work on its all-new predecessor and the upcoming GT Black Series gets a flat-plane version of it, the M177 will first get a couple of upgrades to make more fuel and emissions efficient.

One of those upgrades will probably sadden some of its fans, but more on that later. First previewed in M176 guise by the current S 560 and the Mercedes-Maybach GLS 680, the E 63 facelift powertrain will switch to a mild-hybrid configuration, using a 48-volt electrical system.

Don't think of is as a power add-on necessarily, though, but more of an easier way to improve performance without compromising fuel efficiency. Audi has made a similar move with the latest RS6 Avant and its 4.0-liter TSI V8, for example, which coincidentally is also a “hot-vee” engine like the AMG.

In short, the facelift E 63 will get a 48-volt belt alternator/starter electric motor fitted between the engine and the 9-speed automatic transmission, which still uses a multi-plate clutch system instead of a torque converter. With around 22 horsepower and 250 Nm of torque at its disposal, the small electric motor will have various uses.

The main idea is obviously represented by the extra boost to the ICE engine, reducing turbo-lag at lower rpm and improving the overall engine response. On the other hand, the mild-hybrid system will also allow the V8 to coast for a longer time in normal driving situations, where the massive oomph of the engine isn't needed to keep the car moving.

Together with a cylinder-deactivation system, which essentially transforms the V8 into a four-cylinder, and an improved start/stop system, the new E 63 will drink a lot less fuel than its predecessor. We're looking at fuel economy and CO2 emissions improved by around 15 percent compared to the current car, while performance is expected to increase.

With around 585 horsepower for the standard E 63 and 630 horsepower for the top of the range E 63 S model, the 0 to 100 kph (62 mph) acceleration time should get even closer to the 3-second threshold. Keep in mind that the power numbers can be supplemented by an extra 22 horsepower and 250 Nm from the electric motor.

Design-wise we already have a clear picture of where most of the differences will reside. The E-Class W213 facelift will get new, slimmer headlights with improved LED technology, which will obviously be offered on the E 63 as well.

The current grille will be replaced by a Panamericana-style one with vertical slots, while the taillights will switch from a vertical design with a horizontal one, inspired by what the current Mercedes-Benz compact cars have.

The interior will be less of a revolution regarding looks, but an all-new AMG steering wheel is set to be part of the package, while the driver will get to play with an improved version of the MBUX infotainment system with an integrated touchscreen.

As far as the less positive aspects of the 2021 Mercedes-AMG E 63 go, it seems like the car will lose its thunderous V8 burble. It was bound to happen at some point, especially on the road to full electrification of the Mercedes-AMG lineup, and the main reason for it seems to be the addition of an aggressive gas particulate filter (GPF) on all ICE-powered models.

Not a single pre-production AMG prototype caught on camera seems to sound like its predecessors but it's all for improving emissions across the range and avoid paying fines for a more restrictive EU legislation that's inbound from next year.

That said, the improved performance will probably make up for it, even if it's being delivered in a more incognito mode than before. Expect the revamped Mercedes-AMG E 63 family to be revealed around 6 months from now, not long after the regular E-Class goes official. 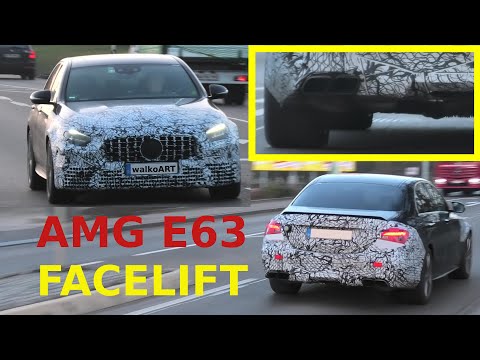 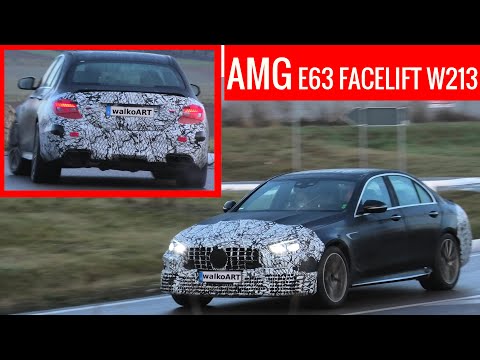