Here’s a fun one for you. What happens when a genuine hot hatchback races a muscle car on the latter’s terms? We’re talking straight line acceleration over a short 1/8-mile distance - although, this scenario does tend to favor cars that are more lightweight and can put their power down more efficiently.
6 photos

I know what you’re thinking. You just got that 2021 Civic Type R and you’re loving every second spent behind the wheel. Sure, it’s quite a car. Not too heavy, plenty of power for zipping around town and getting the jump on people at the light, and all from an efficient and relatively fuel efficient 2.0-liter turbocharged four-cylinder engine.

It’s also quicker than older iterations. Remember back when the Type R used to have a naturally aspirated engine? Yes, it was very fun to drive, but its 0-60 time wasn’t exactly tremendous when compared to that of rivals like the VW Golf GTI or the Focus ST.

Anyway, today’s Civic Type R is a formidable hot hatch, and we wouldn’t blame you for wanting to find out what would happen if it was to race a proper muscle car such as the sixth-generation Chevrolet Camaro SS.

In the end, there was just too big of a power gap to overcome for the Japanese hot hatch, resulting in an easy win for the Camaro. 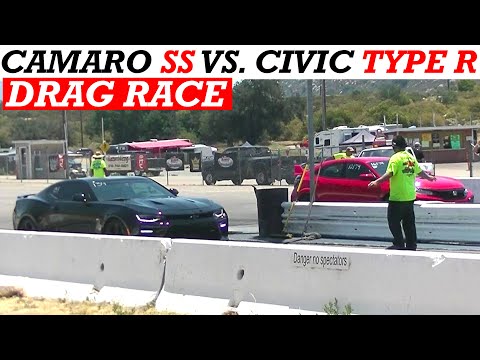