1 These Are the Five Most Reliable Used Sedans You Can Get for $5,000 or Less

Custom 1981 Ford Capri 2.8i Originally Owned by Henry Ford II Can Now Be Yours

Vlad Mitrache
The Honda Civic Type R is notoriously bad in drag races, losing almost every confrontation with its hot hatch peers due to its inability to launch effectively despite having bags of power.
10 photos

Whenever the Type R loses one of these races, its fans are always quick to point out that straight-line acceleration is not what the car was created for. Put it on a circuit, though, and its front-wheel-drive architecture and manual transmission stop being the huge liabilities they are in a drag race, allowing the Civic to perform at the highest level.

Not the kind to take internet comments at face value, British entertainment show Fifth Gear decided to put that claim to the test. However, instead of comparing it against modern Volkswagen Golf GTIs or Ford Focus STs, they chose a much more special opponent.

Back in the 1990s, Honda came up with the NSX, a mid-engine V6-powered car that knocks at the door of the supercar category. It should probably just barge in, but you know how polite the Japanese can be. Anyway, supercar or not, the NSX has managed to achieve cult status and is regarded as one of the coolest cars ever to come from the Land of the Rising Sun.

It's not all about nostalgia, though, as the NSX was developed to match or even beat the performance of a contemporary V8-powered Ferrari. Whether it managed to do that or not is another discussion, but it definitely cost less and was more practical, not to mention famously reliable.

All that's fine and dandy, but what Fifth Gear's Jason Plato wants to find out is whether the almost 30-year-old model is quicker than the modern Honda Civic Type R hot hatch around a track. To be fair, the orange NSX you'll see in the clip below is only 16 years old or so, being one of the very last to be built by Honda before it discontinued the model's first generation.

This definitely has the making of an interesting battle, and we must admit we're a bit torn between which of the two cars we'd like to win. On the one hand, you'd hope almost three decades of progress would yield a car that offers better performance on and off the paper, even if it comes from a different class. On the other, we'd hate to see the venerable NSX lose to a hot hatch. So, which way will it go? 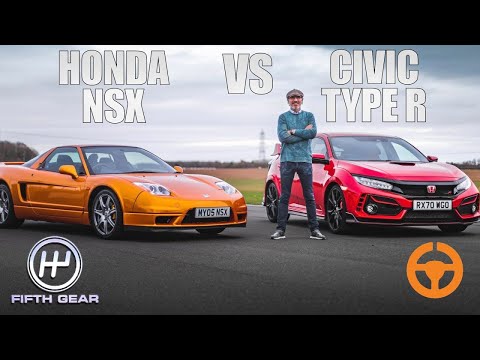