5 Uready E-Trike Effortlessly Glides on the Road, Looks Perfect for Summer
Car video reviews:
Up Next

After 405 miles (652 kilometers) of driving, brothers Jeff and Christian of JR Garage have published an update on their Mustang Mach-E. For 22 minutes, the following clip centers around the niggles that Ford could improve on the mid-cycle refresh of the e-crossover.
26 photos

Purchased as a replacement for their Model 3, the Mustang Mach-E doesn’t match the Tesla in terms of charging network. The regen and transitions aren’t smooth either, and the forward visibility is described as mediocre. Poor ground clearance, huge door sills, piano-black exterior and interior trim pieces that are extremely hard to keep clean, the bad location of the door handle release, skinny tires, and the fiddly volume knob have also made the list of complaints.

Jeff and Christian further mention that Ford offers the Mustang Mach-E with a single key fob. And finally, you can’t open the frunk with the key fob or phone app, the hood is pretty hard to close, and the horn is ridiculously loud. None of these problems are so bad that potential customers would be put off, but more importantly, the Ford Mustang Mach-E is a thorn on Tesla’s side because it offers better quality and better value than a brand-new Model Y.

The Blue Oval asks $42,895 excluding freight, options, and the $7,500 federal tax credit for the base specification, which is pretty nice as far as standard equipment is concerned. Ford also boasts more drivetrain-battery combos than Tesla, which opens the Mustang Mach-E to a wider audience.

Awarded Top Safety Pick by the Insurance Institute for Highway Safety, the electric crossover with Escape underpinnings can also surprise in a straight line if you’re prepared to spend $59,900 for the GT or $64,900 for the Performance Edition. The most expensive models will be available to purchase from April 28th, and both of them feature a dual-motor drivetrain. 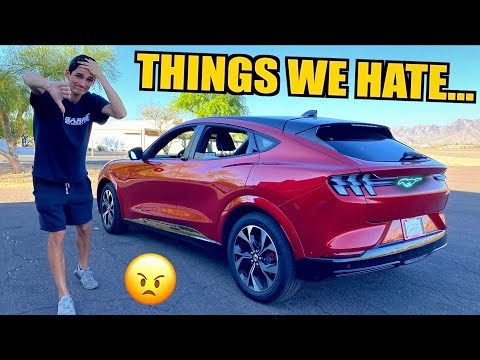