3 2022 Ford Bronco Warthog Gets Spotted Next to the Right Truck, an F-150 Raptor

4 Ford Posts Record Electrified Sales in February, but It's Not All Roses

While it doesn’t exactly have the heritage of the Shelby GTs, Ford does explain its 2021 Mustang Mach 1 is the “most track-capable member of the Mustang line-up to ever grace UK shores.” It’s now available to order, and the first deliveries have been scheduled for June. But you’re not going to like some of the other details.
14 photos

First and foremost, it’s important to note that after the Bullit special edition, the Blue Oval graces the Old Continent (Brexited or not, Great Britain remains an integral part of Europe) with yet another iconic nameplate for the Mustang series.

The Mustang Mach 1 will carry on the good reputation of the performance-calibrated 5.0-liter Coyote V8 engine and also deliver lots of “performance enhancements for track-ready capability and on-road driving pleasure.”

Better yet, the Mustang Mach 1 is also the first version of the iconic pony car that’s available in Europe with the high-performance Tremec six-speed manual transmission. It even comes with rev-matching technology for “seamless down-shifts,” and the fastback also has a standard limited-slip differential.

With that said, it’s time for the bad news. The 2021 Mustang Mach 1 that will soon become available in the UK is costlier and less powerful than its U.S.-spec counterpart. There’s just no other way to put it. At home in America, the MSRP starts at $52,270, but the British market model kicks off at £55,185 and £57,185 (with Tremec or the ten-speed auto, respectively).

That’s around $76,835 and $79,617, respectively, at the current exchange rates. Of course, we know that moving the steering wheel on the other side isn’t exactly cheap (and there are other considerations, naturally). In this context, it's even sadder to also find out the Mach 1's engine has been underrated for the UK market. 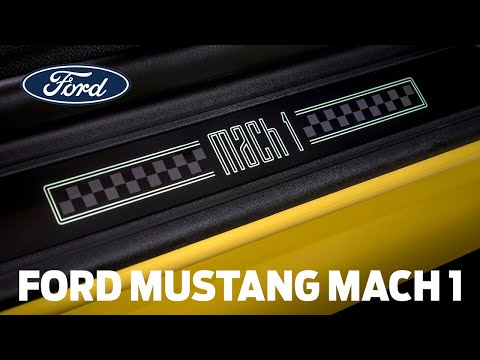