Home > News > Renderings
Aurel Niculescu
The U.S. automaker remained secretive when the time came for the 2021 Ford F-150 Raptor to showcase its exact horsepower and torque ratings. Still, the company was in turn surprisingly outspoken when trying to quell rumors that hybrid or even fully electric versions might be coming down the line. So, a Raptor with six wheels is even more far out of the question. But that shouldn’t stop anyone from imagining it.
7 photos

If we are to judge solely based on Ford’s marketing shenanigans, the 2021 F-150 Raptor is already a compelling piece of engineering. The automaker created it to boost the truck's off-road capability with an “all-new five-link rear suspension, electronically controlled next-generation Fox shocks with Live Valve technology, plus first-in-class available 37-inch tires to tackle tougher terrain on high-speed desert runs.”

That clearly sounds like a mouthful, and we’re just going to extract the essentials. Although it comes with the same V6 engine as before (with still unknown horsepower), the redesigned Raptor will be capable of tackling rough terrain at even higher speeds than its predecessor, as well as jump and catch massive air.

It all sounds incredibly complicated when discussing the technology behind the build, but that really doesn’t matter to virtual artists when coming with CGI transformations into a different breed of “supertruck.” That’s easily demonstrated by the Drivable Designs channel on YouTube when taking the stock Raptor and transforming it into a 6x6 behemoth... in just five minutes.

Of course, for the purpose of not inducing social media boredom, the virtual design process was sped up quite a bit; we can imagine the artist actually needed a few good hours to achieve the spectacular result. And don’t hurry to dismiss this six-wheeled F-150 just as fast, because even though Ford won’t ever build such a version, there’s at least one aftermarket specialist that might have a go at the idea.

We’re, of course, referring to Hennessey Performance, with the Texas-based tuner already adept at taking these high-performance trucks and giving them an extra pair of wheels – just like it recently did with the 2021 Ram TRX to make the Mammoth 6x6. 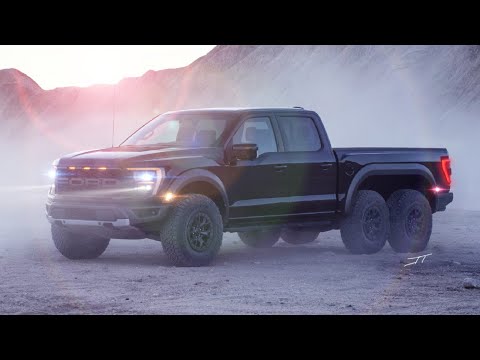