Mihnea Radu
With moments to spare before the full reveal of the Hellcat-powered Ram TRX, Ford was spotted trying to get back on the horse by working on its own new performance truck. This is the first spy video of the all-new Raptor, doing some road testing.
1 photo
The video was recently released by the F150gen14.com forum, where a discussion is currently taking place around the specs of this sports truck. They're also suggesting that it's a 2022 model, which is possible but goes against what we saw in brochures before the regular F-150 came out.

With a truck like the Raptor, the exhaust sound is what people are going to be paying attention to the most. Some have said that it sounds like a V8, while others even go as far as to suggest a supercharger is at work. However, that might be wishful thinking.

The audio in the short clip is pretty rough because of all the wind noise. However, we can't hear anything that would indicate a V8 is present here. In addition, Ford is not the type of automaker that goes back on engineering progress it's made, and turbocharged V6 engines now power not just the Raptor, but almost every luxury or high-performance model they have.

Power should still go up even without the V8. On the other hand, it's still possible to have a V8 in a kind of special edition model that takes back the performance crown from the Ram and a potential supercharged Silverado. And if that doesn't work out, you can always ask Hennessey for an engine swap.

One thing that we know is changing for sure is the body, as Ford will only the SuperCrew body; no SuperCab. Our previous spyshots have shown a re-routed exhaust system accommodating more advanced coil spring rear suspension. Tell us what you think is under the hood in the comments section below. 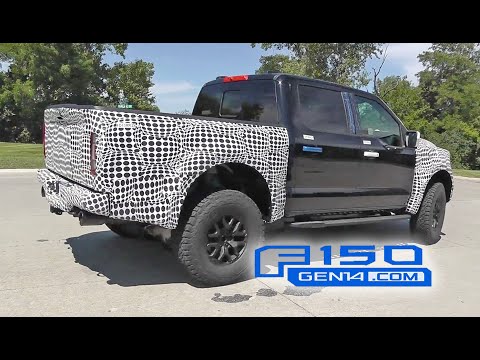