1 The Ford F-150 Can Be a Stranded EV's Best Friend, Charges BMW i3 in Three Hours

Although the crown is often contested, the Ford F-150 is the king of pickup trucks. Even though this 2021 model has "hybrid" written on the back, it hasn't been turned into a Prius. To prove that Ford lets you have your cake and eat it, the guys at Fast Lane Truck organized a drag race against the outgoing Raptor.
4 photos

New generations of F-150 don't come along very often, and Ford likes to make the kind of major changes that will ensure long-term popularity. With the 2021 pickup, they're targeting better mpg numbers by pioneering some hybrid technology that might also trickle down to the next-gen Raptor.

The interesting premise for this drag race is that the F-150 Hybrid costs more money ($79,000) than a sporty Raptor ($77,000). This is partly because of the powertrain technology and an interior that feels miles above its predecessor. The leather is Lincoln-worthy, and the console has Playstation graphics.

But the Raptor's high-output EcoBoost is rated at 450 horsepower and 510 lb-ft (690 Nm). Plus, it's bright red, so it's got to be faster, right? Well, just before the race, the crew make a couple of 0-60 mph sprints, and the numbers suggest it will be a close one.

The first race sees the 2021 F-150 struggling with the launch, but it wins convincingly in the second. Now, TFL's drag races are notoriously controversial, and this isn't a full quarter-mile. Still, it's safe to say the new model is at least equal to the Raptor, the outgoing model. That's like the new Civic being as quick as a Type R, which is frankly embarrassing for the little dinosaur truck. 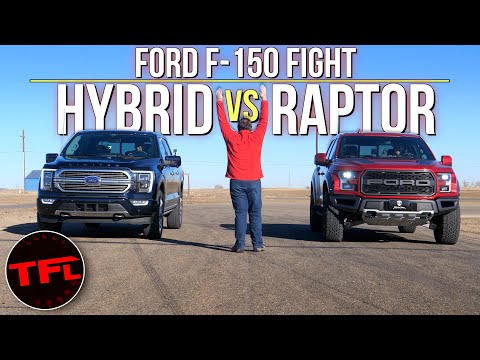