5 The Kraken Is A Modified Ducati 750SS That Defines Two-Wheeled Ferociousness
Car video reviews:
Up Next

2021 Ducati Monster Goes Back to Basics With Lightest Naked Yet

The Monster was born in Ducati’s range back in 1993 as a crazy proposition in the sports naked segment. The bet paid off, and the model has quickly risen to the status of one of the most successful Ducati bikes ever, selling 350,000 units since its introduction. And now comes the meanest, baddest Monster to take the legacy even further.
10 photos

On Wednesday evening (that would be Italy time), Ducati aired the fifth and last episode of the World Première web series, the same that brought us the exciting Diavel 1260 Lamborghini no more than a week ago. This time, however, we were treated to the new Monster.

The bike is described by its maker as the “lightest, most compact” ever made, and at that 166 kg (366 pounds) dry weight, that statement couldn’t be more accurate. The bike lost pounds all over to be able to brag with these figures, from the engine itself (2.4 kg/5.2 pounds lighter) to the frame (4.5 kg/9.9 pounds lighter).

Despite losing weight, the bike gained more power - the Testastretta 937-cc twin-cylinder L-shaped engine (larger than the 821 used until now) that powers it develops 111 hp at 9,250 rpm.

Design-wise Ducati says it went back to basics with the new Monster, and created it “based on the same concepts that bind it to the unforgettable Monster 900.” That doesn’t mean some revisions haven’t been made, though, especially in the comfort department. There, for instance, the riding position is less loaded on the wrists, feet can more easily be put on the ground when needed, and the seat height varies between 800 mm and 820 mm.

The bike is equipped with adjustable ABS Cornering, Traction Control, and Wheelie Control. Three riding modes are available (Sport, Urban, and Touring), selectable through the handlebar controls and the 4.3-inch TFT screen.

The new Monster will be available in dealerships in April 2021. Pricing has not been announced yet but all the other details on the bike as released by Ducati can be found in the press release section below. 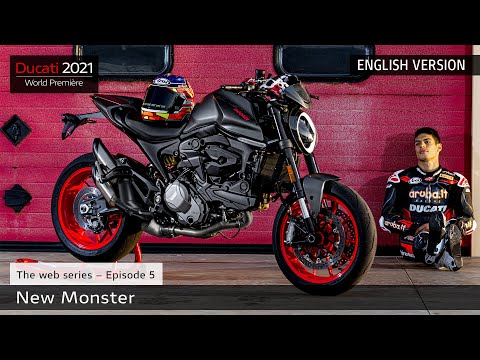