2 BMW 3 Series vs. Jaguar XE: A Choice That Might Prove to Be Subtly Difficult

5 How Bespoke BMWs Are Born: A Detailed Guide to the Individual Manufaktur Program
Car video reviews:
Up Next

Can you believe BMW still makes the M760Li? The Bavarian flagship is not only a top contender in the German luxury limo class but also one of the last non-supercars powered by a V12 engine. And it's fast, very fast.
4 photos

German cars used to have some of the most advanced V12 engines in the world. They could be brutally fast and raw, like the wide-bodied Mercedes SL 65 AMG. Or they could be ultra-fast, luxury vehicles with high levels of refinement.

The M760Li falls right in between those categories. It was one of the most talked-about cars of 2017. Even though it wasn't a true M car, this 600-horsepower behemoth took on multiple opponents and won drag race after drag race.

In a world dominated by V6 and V8 mills, an extra pair of cylinders made it a special vehicle. The M760Li stopped getting attention after a while, but it's still in production, at least for now.

Can you imagine receiving a phone call from your local BMW dealer asking if you wanted to drive the 2021 model with the big grille and new features? AutoTopNL couldn't say no, got the key, and decided to blast down the Autobahn at high speed.

Now, traffic was pretty bad that day, so it took them a couple of tries before reaching 189 mph (304 kph). It's worth mentioning that the current model is down on power, which now sits at 577 hp and 627 lb-ft (585 PS and 850 Nm). That has to do with emissions regulations hitting hard and requiring BMW to fit a particulate filter.

We've included an older video to show what the 600-horsepower versions were capable. There isn't a real difference, and if you want more, we know G-Power can extract close to 700 hp from this 6.6-liter twin-turbo.

Of course, this being a facelift model, it comes with the giant grille. But there's not much to differentiate the M760Li from a 7 Series with the M Sport package. Yesterday, we showed you a comparison review against the new S-Class, and the BMW was declared the moral victor because the interior was reportedly better built and the car was cheaper. 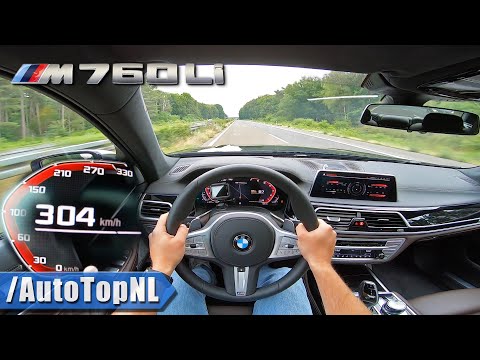