Redesigned last year from the ground up, the M3 is considered the very best sedan in the segment. Available with a manual or automatic transmission and rear- or all-wheel drive, the four-door thriller features a 3.0-liter six with a similar amount of horsepower as the W205 C 63.
36 photos

Codenamed G80, the newest M3 of them all, is a proper driver’s car, although BMW could have done better in terms of styling. The oversized kidney grille and the design team’s hostile attitude toward criticism are not enough to scare customers away from dealership forecourts. Speaking of which, The most affordable variant available today is $69,900, while the M3 Competition xDrive is rocking a $76,900 MSRP excluding freight charge.

The car in the featured video is the mid-range M3 Competition, which is listed at $72,800 before taxes and options. Over the quarter-mile, the Bimmer makes easy work of the Audi RS 5 Sportback and the W204 C 63. It’s not any AMG, though. It’s a no-nonsense Black Series from 2011, a tire-smoking monster with a free-breathing V8 and a rear-axle diff lock.

Obviously enough, the Bavarian sedan hooks up better thanks to the stickiest tires on the grid. They’re called Michelin Pilot Sport Cup 2 Connect, and the Connect part refers to sensors in each tire that wirelessly connect to a control box and a mobile app. In other words, the driver can see vital data about these rubber boots from the previously mentioned app.

It’s important to highlight that BMW runs wider tires than the Merc as well, and the Audi feels like an extra in this series of drag races because it’s an understeery intruder that rides on a FWD/AWD platform.

Despite being the slowest over the quarter-mile, as in 12.1 seconds versus 11.9 and 11.6 seconds, the C 63 does have the advantage of aural ecstasy. 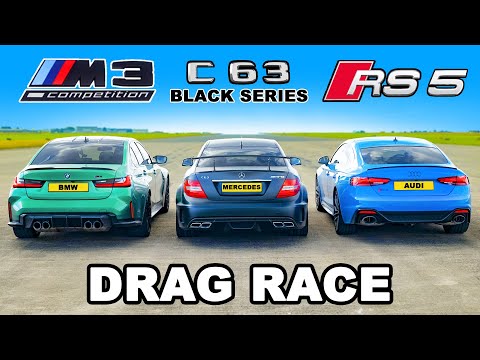