While the big German automakers are locking horns over the EV market, their prestige still comes from high-performance luxury vehicles. Today, we're going to focus purely on the Audi side of things with three cars that feature the same engine, the RS6 wagon, RS7 four-door coupe, and S8 limo.
1 photo
The 4.0-liter V8 is not the same one they had last decade. It was developed with a lot of help from Porsche and, according to the company's own statements, will be the last of its kind. Audi is starting its move towards electrification, and by 2025, at least a quarter of its range should be battery-electric. That's pretty sad news, though the RS e-tron RS somewhat sweetens the blow.

There are other Audis that use the 4.0-liter twin-turbo V8. For example, the SQ8 just migrated to such a powertrain. But these three are the most competitive models if you exclude the RS Q8. So are there any differences? Well, not that many. Even though the S8 has a less exciting badge, it's only down about 30 horsepower, though it could be even less than that if you strap them to a dyno.

The interiors are largely the same, and while weight is a factor, they're roughly in the same ballpark. The gearing and general tuning for the launch control will determine the winner, not that there are any losers when you're talking about such fast and expensive rides. The first contender is the RS6, and it manages to hit 62 mph (100 kph) in 3.4 seconds during Automann-TV's acceleration test. Going all the way to 124 mph (200 kph) takes 11.6 seconds. The S8 sedan takes 3.3 and 12.0 seconds, respectively, though it's worth noting that this was done during the summer.

And finally, we have the RS7, which is the sexiest of the bunch. Even though it has a sporty shape, the coupe needs 3.5 seconds to reach 62 mph and 11.7 seconds for 124 mph. It's a disappointing result, to say the least. But you've got to remember that this is a sample of Autobahn acceleration, not a drag race. 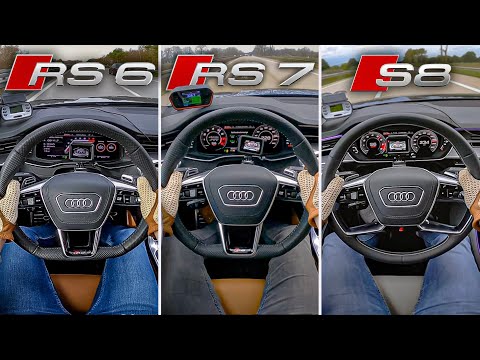