4 Charger 392 Drags Infiniti Q50 Red Sport in the Damp, One Is Definitely Quicker

Once known as the Optima, the fifth-generation South Korean mid-size car is now badged as K5 everywhere. And it’s a good thing. Meanwhile, Acura’s TLX has just reached its second generation, and it’s the newer rival to prove itself.
31 photos

Born at the onset of the new millennia, in 2000, Kia’s Optima dabbled inside the mid-size passenger car segment (mostly) in a traditional four-door sedan configuration. But as it matured, the South Korean dared to boldly go where no Kia has gone before. Right into the areas of “space” where cool cars live.

Now, the K5 moniker has been adopted everywhere, along with a total makeover. And while it may never be everyone’s cup of tea – it is also certain to amaze with its quirky exterior design. Meanwhile, Acura’s TLX compact executive car followed in the footsteps of predecessors such as the TL and TSX models. And it’s the one with mostly traditional cues.

With the RLX in search of greener pastures, the TLX now carries the burden of holding the flagship sedan torch high for Acura. With a little help from the returning Type S branding from time to time, as is the case here. Of course, the host of the Sam CarLegion channel on YouTube tried to level the playing field by also calling out a K5 GT for this feisty JDM vs. KDM encounter.

A quick look at the specification sheet (at the 0:29 mark) shows the K5 GT as the underdog. It opposes a 2.5-liter turbo four-pot with 290 hp and front-wheel-drive against the Type S with a 3.0-liter turbo V6 and AWD. So, at first sight, all bets are on the Acura – though bear in mind the TLX is also heavier.

Well, everything goes as initially envisioned... partially. So, the first rounds (from 4:20 and 5:35) are traditional heads-up drag races. This is where the Type S asserts its supremacy by winning both legs at bus-length distances. With more power and AWD, it naturally blew away the K5 GT... until it didn’t.

This is because roll races (from 6:28 and 7:45) can make a real-world difference. So, the K5 GT initially shied away from its rival by a whisker, and then it decided to own the Type S like a champ during the final leg. Unfortunately, with two rounds for each car, this encounter remained surprisingly undecided... 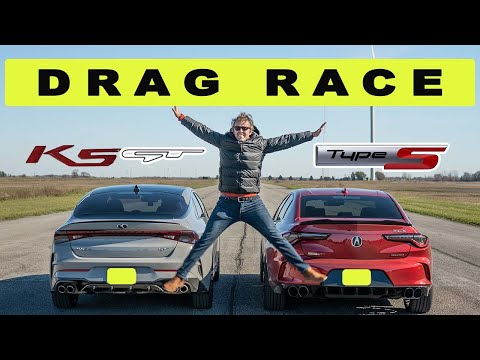