3 This 2020 Volkswagen Golf Redesign Is Doing It Right

Mihnea Radu
Strangely, even though the Golf 8 has already been lowered on custom wheels, there's a shortage of raw video footage. This is one of the most interesting clips we could find, showing the 1.5 eTSI engine in action during a fuel consumption test.
1 photo
The term "mild-hybrid" doesn't exactly fill you with excitement. On the one hand, it doesn't sound like a good Prius rival and on the other, performance might be compromised. But the new 1.5 eTSI strikes an interesting compromise.

The 8-minute video below is a sped-up version of a 33 kilometer (20.5 miles) test with the 2020 Golf, lasting almost 40 minutes. The most surprising thing we saw is how extreme the coasting function can be.

While a normal hybrid might be able to run on electricity, with the internal combustion engine shut off, the mild-hybrid can coast at high speeds. So you have a similar outcome, which is saving fuel, but achieved differently.

Approximately 24% of the journey, or 9.45 minutes, was spent with the 1.5-liter motor shut completely off. The longest period of non-combustion was an uninterrupted 3.51 minutes. Obviously, Volkswagen picked some immaculate, uncongested roads for its test-drive event, but the result is still impressive.

Average fuel consumption was measured at 4.4 l/100km or 64.2 mpg UK, which means those officially claimed figures are achievable. Whenever it's not coasting, the engine can shut off two of its cylinders under light loads. You can buy the Golf with non-hybrid versions of these engines too, plus two plug-in models are coming next year, boasting 200 and 245 hp, respectively.

With 150 hp and 250 Nm of torque, this Golf 1.5 eTSI model will feel a little quicker than a conventional hybrid like the Prius or the basic Toyota Corolla Hybrid model. On the other hand, this is untested technology, and we hear people complaining about the old 1.4 and 1.5 all the time - timing problems, rattles, and the new "kangaroo" effect where it judders at cold starts. 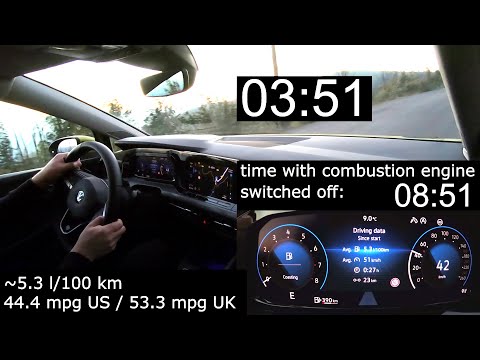