Replacing the 2020 Toyota Supra's factory BMW engine with the good old 2JZ for a monstrous output? That is so last year, with Japanese pro drifter Daigo Saito having pulled off the stunt more than twelve months ago. But what about massaging the said Bavarian motor, a 3.0-liter straight-six codenamed B58? Well, back in August 2019, racing team owner Stephan Papadakis embarked on a journey to build an Mk V Supra drift car whose B58 would deliver no less than 1,000 hp. And the time has now come to see the American-built Toyota in action.
6 photos

Papadakis, who is famous for drifting victories achieved using less-than-large motors making big power, took things step by step. The engine was torn apart, rebuilt, and we can say the same about the chassis, with mandatory goodies such as an intercooler and roll cage making for fabrication highlights.

And his latest video update, which landed just hours ago, shows the machine, which is aimed for the Formula Drift series, hitting the track for the first time.

Even though the powerplant is capable of taking the game to the four-digit output, it current runs on moderate boost, while it has yet to receive its dose of nitrous.

Note that while the factory block and crank are still in place, the rods and pistons obviously received aftermarket attention.

For the record, the motor features a larger BorgWarner turbo, an AEM fuel injection system, a Supertech Performance valvetrain, an AEM Infinity ECU and motorsport wiring/electronics, while the monster output is achieved while using E85 Ignite Red 114 Ethanol juice.

As you can imagine, the rest of the vehicle is loaded with custom work. So while the factory sound insulation and the paint are gone, the Supra has been fitted with Rocket Bunny wide fenders (yaaay!) and a wrap.

And since drifting sometimes involves kissing the wall in literal fashion, the build takes this into account. For instance, the rear quarter panels, which are normally included in a much larger side panel, have been detached, while the wrap consists of multiple partial second skin jobs. So, in case anything goes wrong, the vehicle can be brought back to sliding condition as efficiently as possible.

Oh, and thanks to the on-board scenes, you'll get to see Aasbo working the H pattern shifter of the Gforce GSR four-speed Dogbox transmission (think straight-cut gears), while it looks like that RSR fully adjustable suspension works wonders on the track.

We're looking at more than just a spectacular drift car here, as this build has the potential to silence the naysayers who, amusingly, don't show love to the BMW engine of the Mk V Supra. 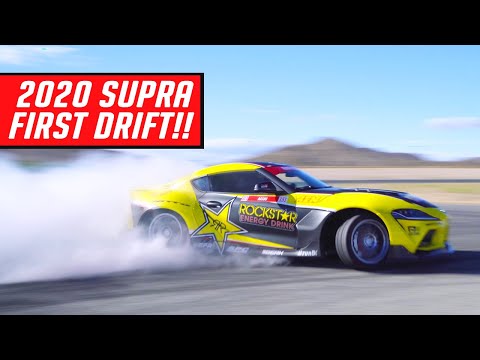