4 Porsche Knows we are Incredulous, Returns With Panamera "Record" Onboard POV

5 Raw-Carbon Porsche 935 Is an Exotic Bargain at $1.7 Million
Car video reviews:
Up Next

When it came out (or even before that), the Porsche Taycan was hailed as the first true mass-production electric sports car, even though its body style recommended a different characterization.
1 photo
The idea was that unlike Teslas that focused on acceleration alone, the Taycan was supposed to tap into Porsche's racing DNA to offer just as much performance in a straight line as on a twisty racetrack. Not only that, but it could do it time and time again without suffering from the pesky battery overheating problems that were the main reason why Teslas couldn't do something similar.

Well, the Taycan's been out for a while now, so we pretty much know what it can and can't do. It kept most of its promises and delivered the quickest Nürburgring lap (for a production-spec EV) last year, prompting Tesla to send two Model S prototypes to save face - something they allegedly did, even though their time won't count since the vehicles were only prototypes.

Even though its price and performance levels make the Model S its direct Tesla competitor, it's on-track proficiency makes the cheaper Model 3 Performance a much more suited comparison. The smaller Tesla has proven its usefulness on a racing circuit, which currently makes it the company's closest answer to Porsche's Taycan.

Since high-speed cornering ability and overall agility are pivotal for track driving, the famous moose test can be just as relevant as comparing lap times. The Spanish outlet Km77.com is known for subjecting every new car it can get its hands on to this trial, and now it's done it with the 2020 Porsche Taycan Turbo S.

Let's start with the bad news: the highest (entry) speed the team managed to fare the Taycan through the carefully arranged cones without knocking any of them down was 78 kphh (48.5 mph). That's underwhelming, to say the least. The Audi Q5 - a harmless, relatively tall crossover - managed to do it at 82 kph (51 mph). So, what gives?

If you watch the actual video of the two passes, you'll notice the difference. Unlike the Audi crossover, which loses almost all of its speed mid-way through the maneuver due to the intervention of the active safety systems, the Taycan carries most of it throughout the entire process. That's what sportier vehicles tend to do because their chassis and suspension system allow it. However, the Taycan is just too heavy and too large to work within the fine margins of this test at greater speeds.

Back in 2019, the Tesla Model 3 cleared the same test with a speed of 83 km/h (51.5 mph). However, like the Audi Q5, it looks as though the Model 3's systems slowed down the car more aggressively than the Porsche while also allowing slightly more oversteer. It's worth noting that the track asphalt has been changed in the time between the two tests, with all vehicles seemingly performing worse on the new surface.

At the end of the day, though, the Moose Test shows just how much the Taycan needs to work to cover that excessive weight (5,060 lbs or 2,295 kg). It also shows that no matter how strong its acceleration or how good it might be through a corner, it's still a four-door sedan that should only be used as a sports car occasionally. 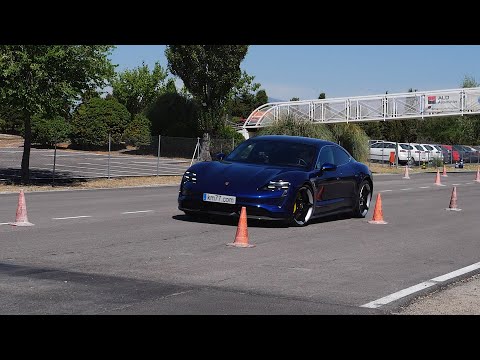 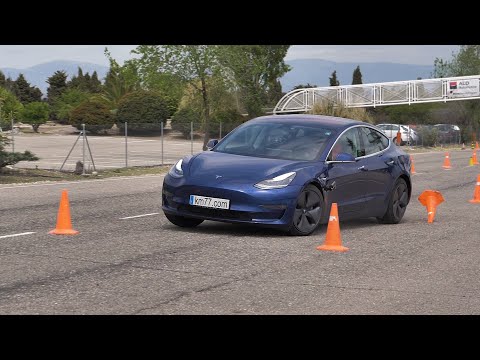