After so many years of seeing crazy Toyota Supra builds that routinely developed over 1,000 horsepower, people started associating the Japanese model with this kind of output. That's probably why the announcement of a new model with a mere 340 hp in its top form felt a little underwhelming.
214 photos

The other reason was the very close relationship of the new model with BMW's Z4. The two cars share a lot of their underpinnings, including the two engine options which are both based on BMW units. We'll skip the two-liter altogether and focus on the three-liter straight-six since that's the configuration that brought the Supra in the limelight in the first place.

Even though the new model is still young, we can already say that everyone's fears were completely unfounded since we're already beginning to see Supras with over 1,000 horsepower. BMW's engine proves it might be a worthy successor to the 2JZ-GTE, so once the nostalgia over the fourth generation Supra wears off, fans might start to love the new one as well.

However, the Supra we have here facing against a Chevrolet Corvette C8 is almost completely stock, which means we're looking at 340 hp and 369 lb-ft (500 Nm), the latter available from as low as 1,600 rpm thanks to the turbocharger. Together with the eight-speed automatic transmission, this configuration enables the Supra to reach 60 mph from a standstill in just 4.3 seconds.

While that's more than decent, it shouldn't be enough to beat its opponent for the day. The C8 isn't a brutally powerful machine, but you still can't overlook the 376ci (6.2-liters) naturally aspirated V8 and the 495 hp it produces. Given their nearly identical weights -
3,373 lbs (1,530 kg) for the Vette and 3,351 lbs (1,520 kg) for the Supra - this one will definitely go down to power and traction.

Apart from the clear advantage it has in terms of power, the C8 has two more things going for it: it has a 60:40 weight distribution favoring the rear, which should help with grip during a straight-line acceleration run, and also packs a launch assist system that the Toyota doesn't have, which will prevent the wheels from spinning. But despite all this, the Supra manages to surprise everyone. 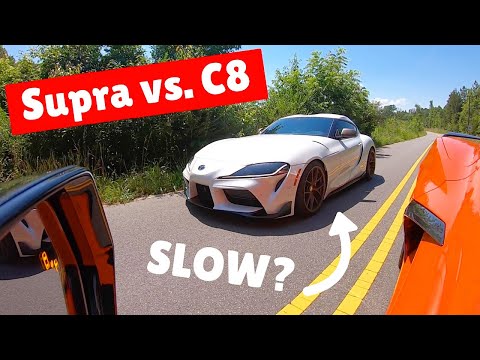