5 Art Car: Renault Twizy by Jacque Tange
Up Next

Mihnea Radu
Renault was one of the first European companies to say it was targetting the electric car market, way before Tesla was the household name in Europe. The French firm had several projects we'd consider failures, the Twizy and Fluence ZE, but succeeded with the little Zoe.
5 photos

Launched in 2012, it had a cute girl's name, reminding us of the original Clio. Its shape was more appealing to some than its sister car, the Nissan Leaf, but it also had a few limitations in the technology department.

That's the area where Renault invested the most money. For example, the 2012 Zoe had a 22 kWh battery and a 66 kW electric motor. When we tested it, the real-world range was about 100 kilometers. For 2019, the lithium cell is 52 kW (50 are usable), which is amazing considering they used the same length of chassis.

Officially, the range is rated at 390 kilometers (242 miles) on a single charge, which sounds ambitious. As for performance, you can order a 100 kW motor (136 HP) to teach those normal hatchbacks a thing or two. However, you can still buy the 80 kW motor (109 HP), which is going to be cheaper.

But we're mostly interested in the design. After all, this new model is more like a facelift than anything else. French magazine L'Argus put Zoe and Zoe together to show us the new bumpers with extra trim. You also can't miss the extra-large badge or the new LED headlights. Interestingly, the radar system seems to be integrated into the charging port door, which is a very unusual configuration.

While the body looks like a car that learned about makeup, the interior progressed even further, gaining new screens, soft plastics, and pleasingly modern design. But is this enough to have this over rivals like the electric Opel Corsa and Peugeot 208? And what about the upcoming VW ID.3 or the ultra-cool Honda E? 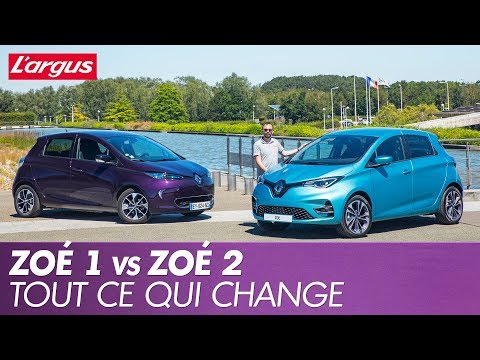