4 BMW i3s, Renault Zoe vs. Kia Soul EV: What Do Women Think of Them?

Home > News > Car Profile
Mihnea Radu
The Opel Corsa-e and Peugeot e-208 are asking for a slice of the European electric hatchback market. But the Renault Zoe, which is the king of this segment, is having none of it.
40 photos

They said it would never work - an electric car based loosely on the Clio platform. But it was the most popular EV in Europe for many years, an now there's a new model that's better at everything. We tested the original back when it came out with a 22 kWh battery and immediately fell in love with the lounge-like seating and hush-hush engine, which made you feel twice as relaxed as everybody else stuck in traffic.

But there was a serious problem with the range, which got partially rectified when the Zoe ZE 40 that came out a couple of years ago. Now Renault is back with an even larger battery pack for the ZE 50 model, which boasts 52 kWh of capacity for an estimated range of 390 kilometers (242 miles) on a single charge based on the WLTP cycle.

In our experience, that number is still optimistic, but even with about 300km, range anxiety will be virtually non-existent around town. Most importantly, it's bigger than the official range of the Peugeot and Opel models, which is about 330 kilometers or 205 miles (50 kWh).

You're not going to be wanting for power either, as the new Zoe comes with a fresh R135 electric motor with 100kW (same as Peugeot and Opel) and 245 Nm of torque. And while she is only good for 0 to 100 km/h in about 10 seconds and a top speed of 140 km/h, you shouldn't buy a cheap EV for the performance anyway. However, you can still buy the 80 kW motor, which is going to be cheaper.

Styling-wise, this is more like a heavy refresh than an all-new model, but that's okay. At the front, you get those LED headlights as standard, but the bumper with the chrome dots and those fog lights are optional. The taillights are basically the only other thing they changed.

But the interior witnesses a fantastic boost. You have the same portrait-style infotainment as in the Clio, much better materials on the dash and console, a cool-looking shifter and wireless phone charging. It doesn't feel like a budget choice at all. But is it enough to compete with crossover EVs from the Koreans, which have a more appealing shape? We'll let you decide. 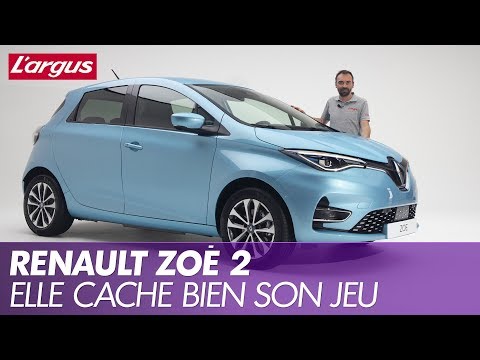