4 BMW Confirms the Death of 2 Series Active Tourer, Will Lure Customers With SUVs

2020 Renault Sandero and Logan Get Facelift in Brazil, RS and Stepway Included

After the facelift, the Opel Astra K range is powered exclusively by engines from the Peugeot family, which means some serious downsizing. Now it's time for the 2020 Insignia to do the same.
3 photos

We think the Astra K is way better than its predecessor, but the Insignia isn't. Sure, the base model is cheap and practical, but it's also forgettable. It doesn't feel like it aspires to be luxurious with its leather or offer more features than you'd care to use. This is something which Opel probably doesn't have the money to fix.

This particular prototype took to the Nurburgring this week with measuring equipment strapped to its wheels, which can only mean one thing: the Insignia is testing a brand new powertrain.

Now, not all of Opels models get tested in this way, so we think that it's a sports model, the GSi, or comes with an engine to be shared with it. Currently, the disappointing Insignia GSi boasts a bi-turbo 2-liter diesel making 210 horsepower, with an AWD system sending you to 100 km/h in about 8 seconds.

There used to be a gasoline-powered model, the 2.0 Turbo making 260 HP, but it was pulled from the lineup for emissions reasons. We believe this spy video previews its replacement, which should be motivated by Peugeot's 1.6-liter turbo making 225 HP and 300 Nm of torque when under the hood of the 508 GT.

This is probably also the highest any Opel will ever go in terms of displacement for a gasoline engine. If you're looking for any more grunt, it's got to be a plug-in hybrid. There aren't any plugs here, though.

Obviously, cosmetic changes are also coming, but they are small ones. The headlights on this prototype appear to be different, as does the grille. But you have to remember the budget for this project isn't huge. 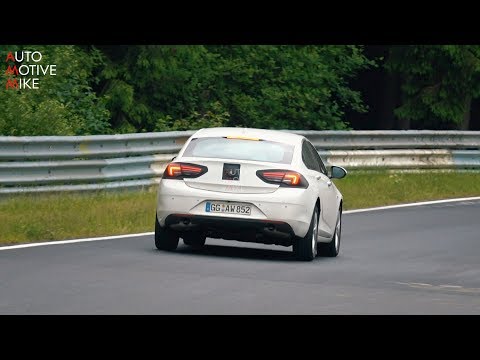