We don't know if it's overpriced technology or bad deals with unions, but Opel's cool cars somehow end up unappealing. The Astra OPC was one of the first hot hatchbacks to cross the €40k barrier, while the Insignia GSi is currently its only sports model selling for an unappealing €47,000.
1 photo
What's a GSi? An iconic nameplate which European enthusiasts may have grown up respecting. But this replacement for the OPC line isn't all that special. For the above-mentioned sum, you get a 210 horsepower 2-liter diesel hooked up to an 8-speed automatic. Not only is the output lower than a top-spec Passat, but the 0 to 100 km/h time of 7.9 seconds is inferior to cheaper and arguably sexier FWD wagons like the Kia Proceed GT or that new Ford Focus ST wagon.

Heck, for €43,800 you can have a base Tesla Model 3 sedan, which is an entirely different kind of machine. But we digress; the subject of this article is a facelift Opel has planned for 2020, which targets the whole Insignia range including the GSi.

After revealing the Astra facelift they'd been working on for a while, we now know that Opel is indeed installing Peugeot engines in its cars, at least the ones that didn't have them already. For the Astra, that meant less power, but better fuel economy, which doesn't sound too good in this situation.

Peugeot has only two powertrains which are suitable for this application. One is 2-liter BlueHDi diesel making 180 HP, the other a 1.6 gasoline turbo delivering 225 HP. Both can be found on the Peugeot 508 GT, which is similarly sized and priced. And in both cases, CO2 emissions are much lower at about 124 grams versus 175 in the Opel, which is partially due to the French car being 2WD and a little lighter.

We're pretty sure that at least one of those engines will find its way into the updated GSi, though we're not sure if the sports Insignia will suddenly become interesting. You see, the Peugeot 508 has a much more striking design and features, including frameless doors and a sci-fi dashboard, whereas this feels like a salesperson's car.

Not forgetting to mention the styling, we want to draw your attention to the notches that have appeared at the bottom of the headlights and other small revisions to the front end. 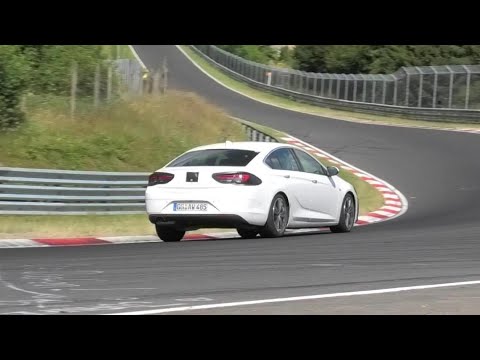