2020 Mercedes S-Class Has Huge Tablet Instead of Panoramic Screen

The S-Class is the car that started Mercedes on this double-screen or panoramic screen design, depending on how you want to look at it. And it looks like the W222's replacement will set the mood once again.
3 photos

The 2020 S-Class, which will naturally wear the W223 codename, has been filmed with a brand new infotainment setup. Clear as daylight, we can see a large main screen with a different radio (3/2 or 16/9). It kind of looks like an iPad Pro, so we're guessing a size of about 12 to 13 inches.

The main difference is that the screen is no longer doubled up by the one for the instruments. It's possible that they will do without the gauges altogether. Where have we seen that before? Obviously inside the minimalist sales wonder that is the Tesla Model 3.

Setting the screens aside, the brand new S-Class has a tough job on its hands. Not only will it have to compete with better German and Japanese rivals than ever, but also booming demand for electric cars. Even though it will have several plug-in versions, the job of entirely running on batteries will be left to the EQ S.

Even though the new generation sedan is more than a year away from its debut, we're getting an ever clearer picture of its design from these Stuttgart prototype sightings. We know that it's going to be slightly wider with a longer wheelbase. Styling should be more minimalist than its predecessor, as seen on recent exercises like the CLS and GLE.

Engine choices will naturally center around the recently introduced inline-6 turbo units with EQ boost, as well as new generations of 2-liter and V8 powertrains. Naturally, since this is the S-Class, expect to see brand new technologies we don't yet know about making their debut here and later trickling down to other Mercedes models. 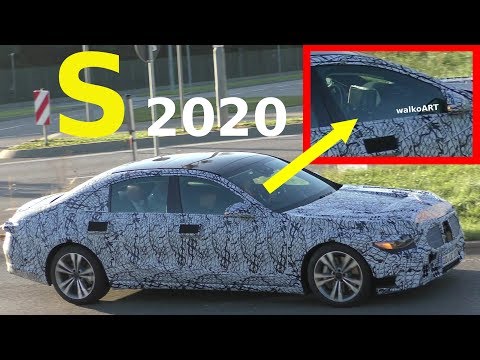