1 2020 Mercedes GLE Coupe Spied, Is Getting Ready to Take Your Money

5 2020 Mercedes-Benz GLE Coupe Takes a Stroll in Germany
Car video reviews:
Up Next

2020 Mercedes GLE Coupe Working on Its Sex-Appeal in Sweden

In 2015, Mercedes made it its business to mess with the BMW X6 by offering the GLE Coupe. Only four years later, we're looking down the grille of a brand new generation, which might be ready pretty soon.
3 photos

You see, like Benjamin Button, the GLE Coupe was born old, derived from the older ML and featuring an interior layout from the flip phone age. It wasn't exactly the last word in class, but because of the badge and some bonkers V8s, enough people bought them to warrant another generation.

Our spy video shows the 2020 GLE Coupe undergoing testing in Northern Sweden. A small section of the camouflage has begun being stripped, and they reveal production red paint. Our hunch is that a full unveiling will take place this summer, roughly at the same time as the BMW X6.

As with the previous generation, the GLE and GLE Coupe have mostly similar bodywork, with revision being made to the trim, roof, and tail. We find that the new model is an improvement from the rear 3/4 view, where the roof curves cleanly into the trunk without looking like it has back problems.

Small tweaks are used to fool you into thinking it's a sportier car, such as moving the number plate below the hatch and getting rid of the roof rails. Despite its dynamic ambitions, the 2020 GLE Coupe suffers from having a fake exhaust system, easily distinguished by the backed up snow in the counterfeit pieces of trim.

Another critical difference between this and the predecessor model can be found under the hood. You're going to have at least one 2.0-liter unit, the GLE 300d with 245 HP, as well as a variety of inline-6 units. No 4.7-liter V8 for the GLE 500 Coupe, but you can look forward to the GLE 53 with the first AMG hybrid system. And to top it all off, you'll also have the GLE 63 Coupe with a similar setup to the E63.

So yeah, cool sports activity coupe. Not the best-looking thing in the world, but up to date in the tech department. 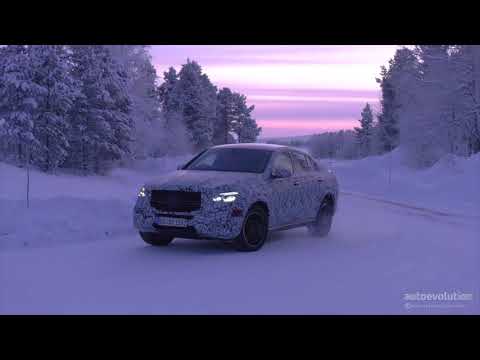