3 Mercedes-Benz GLE Coupe Gets OrangeArt Special Edition, Here's How To Spot One

This is only the second sighting of the all-new GLE Coupe and the model is already starting to grow on us. Mercedes spotter Walko was able to film it from the front this time.
3 photos

The GLE Coupe was launched in 2015, but just like the BMW X5, it's based on an older platform (the M-Class). Despite the awkward looks, it's quite popular and renowned for its sonorous 5.5-liter AMG engine.

Since this is only the second time the 2nd generation prototype was spotted, we're guessing that it will come out in 2019, roughly four years after the original. Naturally, it will compete with the next BMW X6, as well as the newly launched Audi Q8.

The heavily camouflaged body is different in some ways from the regular 2019 GLE-Class, which we've seen with minimal camo. For example, the greenhouse looks much shorter and shrinks towards the back of the car to create a ducktail spoiler.

While the design won't be to everyone's liking, the segment is so popular that mainstream carmakers are jumping onboard. Just this week, we saw that Renault is testing a Captur Coupe. What's that? If you're rich enough to buy the GLE, you don't need to concern yourself with what the plebs are buying.

However, you might want to know about the engine changes. Gone is the 5.5-liter AMG unit, replaced by a 4.0-liter one, though this prototype clearly isn't of the hardcore variety.

All the other powertrains will be of the inline-6 variety with a displacement of around three liters and at least one turbocharger. For the first time, Mercedes will offer an excellent diesel in the 340 HP GLE 400 d Coupe. However, we're not aware of any rival for the X5 M50d (400 HP quad-turbo-6) or Audi SQ7/SQ8 (4.0 TDI V8 with e-charger).

The GLE 450/43 AMG model has been quite popular, so Mercedes will likely give it an upgrade. In place of the V6, they will install the CLS 53's powertrain, complete with 435 HP output and hybrid boost. 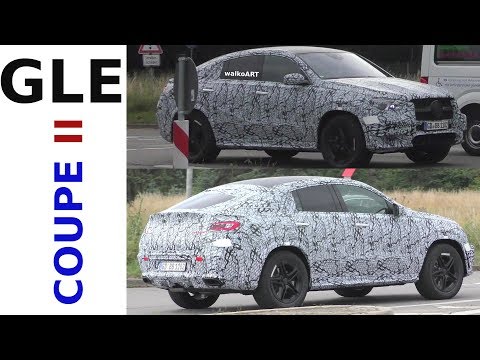