1 New Mercedes-AMG A35 and A45 Show Design Differences, Sound Good

What differentiates a luxury car from a normal one? Mainly two things: design and toys. While we're not sure the all-new GLE Coupe is great in the former regard, it will offer some of the coolest features you can find in a Sports Activity Coupe.
4 photos

BMW coined the SUC with the X6 which invented a whole new market for itself. But competition between the handful of big names in the 4x4 business is as tough as it's ever been. You've also got this GLE Coupe, the Range Rover Velar, not to mention the Audi Q8.

While BMW has not yet revealed its brand new X6, we have a very good idea of what to expect in the tech and design departments. Likewise, the 2020 GLE Coupe holds very few secrets at this moment, even though the prototype spotted in Stuttgart is fully camouflaged.

The "Coupe" has the same front end as the normal GLE. The greenhouse is new, featuring less glass and a roof that curves down to the taillights. We find that it's not as sporty as the smaller GLC Coupe, though that won't stop the people who want Mercedes' best and most expensive from buying one.

What sets the two apart? Well, everything, from the crazy air suspension to the engines and interior. The new GLE Coupe will switch to the latest generation of inline-6 turbocharged engines, though we suspect 2-liter units will also be available.

Looking inside, we spot glimpses of the MBUX infotainment screens, which the GLC will never have. We took the liberty of adding the latest demonstration video of this system to this story because the things you can do boggle the mind.

This prototype looks like the normal GLE Coupe, probably a 450 model that is expected to be popular in America. However, we have already seen the AMG 63 version undergoing testing, and that's expected to have over 600 horsepower. 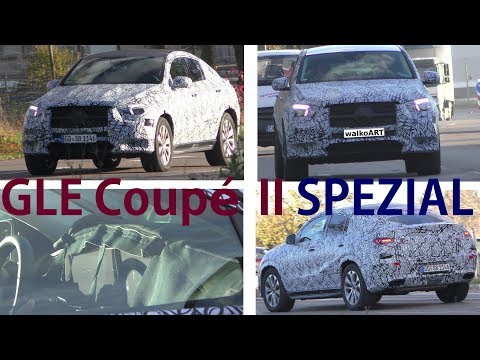