2 2019 Mercedes GLE Dashboard Revealed by Spy Video, Has Something New

3 2019 Mercedes-Benz GLE Spied Testing In Snowy Sweden, We Get A Closer Look

Making a Sports Activity Coupe is probably the trickiest thing in the industry, right up there with re-badging somebody else's car. Some say Mercedes got it wrong with the first generation GLE Coupe just because it didn't start with a clean slate. But what about this thing?
1 photo
After the normal GLE made its long-awaited debut earlier this week, we finally have a more accurate rendering to show you. X-Tomi Design only had to chop the roof and tweak the rear quarter panel. The rest of the work was done by Mercedes-Benz.

We believe the problem with the SUC, in general, is that you have to make one lower body that fits two rooves. Even the new BMW X4, which is a much better example of the species, has miss-matching bulbous headlights and narrow taillights.

The automakers who are successful in making sports derivatives of their SUVs usually start from scratch. Just look at the Audi Q8 and Range Rover Velar. Of course, those two don't have this coupe roof line. But who's to say you need that to be cool?

The whole point of the GLE Coupe is to charge customers more money for pretty much the same thing. Of course, the press release is going to say the suspension and steering are more responsive. But embarrassingly, the smaller GLC Coupe is actually heavier than its GLC counterpart.

Of course, we doubt Mercedes would make a car that doesn't sell at all. And a variety of new engines are sure to attract return customers. For now, we only have details for the 367 HP GLE 450. The Russians are going to like that.

But Europe should get a variety of six-cylinder diesels with up to 340 HP and, we believe, there's even a chance for a 2.0-liter GLE model, though it's unclear if this will be available in the GLE Coupe. The tech package also includes LED headlights that are as powerful as the law allows and an interior that's as luxurious as any other Merc.

Like rivals from other brands, the GLE has a 48-volt electrical system powering things like the 22 HP electric booster, suspension or the water pump and water pump. 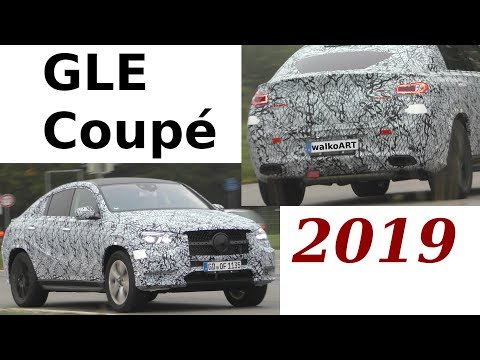