Mihnea Radu
We've actually seen a few pictures of the new CLA 45 online, so it's probably only a matter of days before Mercedes fully reveals this, together with the A45. And while these cars only four-cylinder engines, we're pretty excited.
3 photos

You see, a few years ago, Mercedes decided we need a savage hot hatch with an engine tuned as high as a Mitsubishi Evo and the ability to launch like a dragster. Hot hatchbacks haven't been the same ever since, and this generation promises to influence the class even more.

With a new-fangled turbocharging system and probably EQ Boost technology, engineers were able to get 421 HP from the 2.0L setup. Audi or BMW would need five or six cylinders to offer that kind of output. Heck, it wasn't long ago that an AMG 6.3-liter V8 matched the output of the upcoming CLA 45.

It's also one of the best-designed cars ever to ride on a front-whee-drive platform, as you can see from this spy video shot at and near the Nurburgring. They've added larger air intakes, lowered suspension, skirts, a trunk spoiler and diffuser flanked by quad exhaust tips. Really, we'd have trouble picking the CLS 53 over this, especially when the bigger car is much heavier too.

Just because the platform is FWD doesn't mean power doesn't go to the back. In fact, Mercedes has found a way to shuffle it in such a way to allow the CLA 45 to drift. Meanwhile, the 4Matic system engages much quicker than the previous model and should allow you to reach 100 km/h in under 4 seconds.

It won't be cheap, though. We predict a base price for the CLA 45 S model (the regular model has 387 HP) somewhere in the region of €60,000 or about the same as an Audi RS3 sedan. Given everything that you know about the new Mercedes interiors, which would you buy? 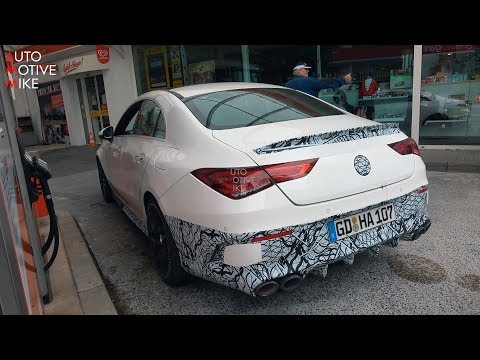